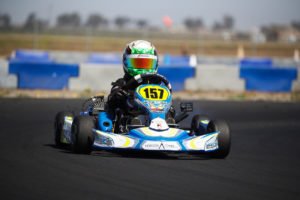 Taking place in Santa Maria this past weekend, P1 Engines once again found their way to the top step of the podium in ProKart Challenge California competition. Taking home a pair of victories and multiple podiums, the elite level engine preparation company now has their sights set solely on the last half of the 2018 season.

X30 Senior driver Dante Yu has been on a winning streak as of late starting back to the Superkarts! USA Pro Tour SpringNationals in Phoenix. Winning round four of the Pro Tour and round three of the ProKart Challenge, Yu did not stop there as took this past weekend’s main event victory by more than two seconds. After qualifying inside row two and running in the top-two on track for the heat races, Yu was the man to beat in the main event and delivered P1 Engines another victory.

Fellow X30 Senior competition and P1 Engines powered driver Colby Dubato showed great pace throughout the weekend including an impressive run in the first of two heat races where he scored the fastest race lap. An unfortunate DNF in heat two forced Dubato to start from the tail of the field in the main event which saw him drive forward, passing 13 competitors to finish 11th all while turning the second fasted lap of the main event. Chance Skaufel made his first ProKart appearance of the 2018 season to finish seventh while Jarred Korth brought home a tenth place at his first Senior race attempt.

IAME Micro Swift driver Logan Chambers had a great run all weekend and started the day qualifying third. Staying inside the top-three all day, Chambers was able to hold on to a podium result in the main event as he took the checkered flag in the second position.

Coming off his second place finish in round three, Enzo Deligny would start round four from the inside of the front row after taking the pole position in qualifying. Running inside the top-five all day, Deligny would go on to finish fifth in the main event. Fellow IAME Mini Swift driver Logan Toke unofficially qualified on the pole position but after a post-session penalty, he was forced to start heat one in sixth. If that was not bad enough, the first wheel-to-wheel action of the weekend for Toke would end with a DNF after first corner incident. Keeping his eye on the prize and ever giving up, Toke pushed through heat two to finish third. During the main event, Toke took the lead on multiple occasions and most importantly, the last lap to add another win to his growing resume.

Stu Hayner was another winner in round three of the ProKart Challenge California program who would continue right where he left off in Santa Maria. Competing inside the top-three in the X30 Super Masters class, Hayner stood on the second step of the podium at the conclusion of the weekend’s final.

In the X30 Junior class Alan Tang finished the day in fifth after qualifying second.