OVERCOMING ISSUES ON FRIDAY, LEGACY AUTOSPORT REBOUNDS WITH TWO CARS IN THE TOP-SEVEN ON SATURDAY AT THE INDIANAPOLIS GRAND PRIX 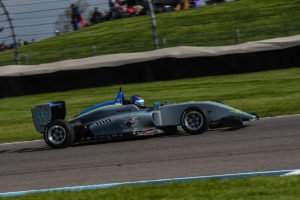 It was a challenging weekend for Legacy Autosport and drivers Alex Baron and Dakota Dickerson for rounds three and four of the Cooper Tires USF2000 Championship. Taking on the Indianapolis Motor Speedway in chilly conditions, a disastrous day on Friday was made made better on Saturday with both drivers claiming top-ten results.

“We had an issue throughout Thursday and Friday that limited our speed,” explained Mike Meyer. “At times, we were more than five miles per hour off down the main straight, which is something that cannot be overcome despite the experience and skills of our drivers. Our crew worked tirelessly throughout the event days and were rewarded with sixth and seventh place results on Saturday.”

With weather in the area for Thursday’s test sessions, Legacy Autosport chose to sit out the first session of the weekend. With the track not yet dry for session two, Baron and Dickerson headed on course running inside the top-ten for the entire session, eventually being classified ninth and tenth respectively.

Friday morning would bring a pair of qualifying sessions with the first one setting the grid for race one that afternoon and the second session setting the grid for Saturday morning’s wheel-to-wheel action. Still working to figure out power related issues in qualifying, Dickerson ended his sessions 16th and 14th respectively while Baron would commence his races in tenth and 12th.

Meyer continued, “Our whole goal in race one was to try to work through our problems and give ourselves a chance in race two on the weekend. My guys continued to work through the issues, and I think we may have turned the corner for tomorrow.”

With Alex Baron ending the first race with a ninth place result, Dickerson was a victim of an unfortunate incident after being driven over by a fellow competitor. Back to the track Saturday morning for round four of the Cooper Tires USF2000 Championship, both drivers improved on their qualifying efforts from Friday, and solidified their places in the top-ten. Dickerson rebounded from his Friday DNF to claim the sixth position on track while Baron added his second top-ten of the weekend with a solid drive to seventh.

With no time off, Legacy Autosport took to the track yesterday for the oval clinic and series test for their one and only oval event on the season. Taking place at Lucas Oil Raceway in Brownsburg, Indiana May 23 and 24, teams and drivers will look to get up to speed after three separate on track sessions.