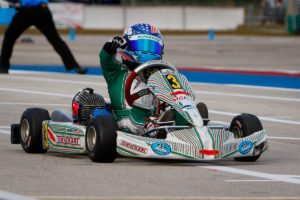 As the 2019 karting season kicks into gear, so does the continued success of the OTK line of products. Taking on the AMR Motorplex in Homestead, Florida, OTK dealers and race teams amassed 24 podium results, including seven main event victories, as 43% off all karts on the grid were produced by the popular Italian manufacturer.

“The SKUSA Winter Series at Homestead was a great event and a great way to start the season for OTK USA, with more than 100 drivers on OTK chassis, multiple final wins and more than 20 podiums. We couldn’t ask for a better way to start 2019,” explained Luis Ruibal of OTK USA. “Congratulations and many thanks to all our dealers, teams, drivers, and mechanics. We are looking forward to a great season and now we are off to the ROK Cup USA Florida Winter Tour in Miami.“

In the headline X30 Senior class it was Rolison Performance Group driver Ryan Norberg who claimed the best results on the weekend. After narrowly missing the win on Saturday and standing on the second step of the podium, the Floridian was a man on a mission on Sunday as he took his Kosmic Kart to the front to claim the checkers. Making it a 1-2 finish for the OTK brand, Patrick Woods-Toth added another podium result with a P2 finish.

The X30 Junior class was dominated by Speed Concepts Racing and Tony Kart drivers over the course of the two days of competition. Luke Lange had a breakout win on Saturday while Justin Arseneau took the top spot on Sunday. Saturday would also see Orsolon Racing driver Diego Contecha claim the second position, giving OTK another 1-2 finish. Topping their results from Saturday, Arseneau was chased across the line by four other OTK drivers as the popular Italian brand swept the top-five. Luke Lange added a second place podium result to his win on Saturday to leave the first event weekend as the point leader while junior rookie driver Jeremy Fletcher (Zanella Racing) crossed the stripe in third. Luca Mars battled hard to obtain his fourth place finish with Branyon Tiner (Rolison Performance Group) ending his day in fifth. 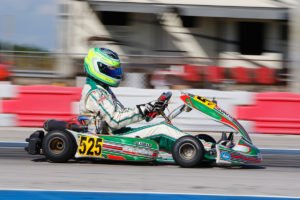 Supertune driver Kai Sorensen put the new Tony Kart Mini chassis on the top step of the podium Sunday in the Mini Swift division after contact Saturday in the late stages of the race took away a sure podium finish. Not to be outdone, Anderson Leonard, aboard a Supertune prepared Tony Kart, finished fifth on Sunday as the new Tony Kart chassis begins to make waves in the North American market.

Saturday’s Micro Swift main event saw 80% of the drivers in the top-five aboard an OTK chassis as Beckham Jacir (JC Karting) crossed the line in second ahead of Enzo Vidmontiene in third, who made a last lap pass to steal the final step of the podium. Luis Umana (Montoya Racing) and Karsyn Walters (Supertune) rounded out the top-five. Sunday would provide Jacir the opportunity to take the win and he did just that as he bested the field of Micro drivers to the checkered flag. Umana secured the second step on the podium while Walters and Salim Hanna (Montoya Racing) ended their weekends in fourth and fifth respectively.

Colton Ramsey (Innovative) and Brett Harrelson (Nash Motorsports) claimed the top two positions in Saturday’s KA100 Senior class and returned to the track Sunday to stand on the podium in second and third as they were bested by OTK driver Julia Boos (Kaos Kart) to add another five podiums to OTK’s weekend results resume.

Dylan Christie (Mike Doty Racing) added a pair of top-three results over the weekend as he claimed the second step of the podium in Saturday’s KA100 class and remained consistent with a third place result Sunday. Kyffin Simpson rebounded from Saturday’s finish and drove a solid main event to come home second. 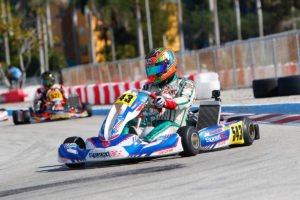 Showing their speed and diversity across all classes, OTK drivers also scored wins and podiums in the Briggs & Stratton LO206 and S4 Stock Master Honda class. Eli Yanko (Ventresca Seberras Racing) topped the blocks in the Masters 206 category while Dan Monteiro (Rolison Performance Group) claimed the third and final step of the podium in S4.

OTK drivers will be back on track this weekend for the opening round of the ROK Cup USA Florida Winter Tour. Taking place at the Hard Rock Stadium in Miami Gardens, Florida, the Italian marque made up of Tony Kart, Kosmic, FA Kart and Exprit will once again be trophy hunting.

Interested in racing with the most popular kart brand in the world? Contact your local OTK Kart dealer and see how you can join the winning team.