With his advancement into the GP3 Series only three short weeks ago, American driver JM Correa will be forced to sit out the remaining Italian and ADAC Formula 4 events citing international licensing regulations. Now firmly focused on the remaining GP3 program for the 2017 season, Correa will continue to gain as much knowledge and experience as possible in preparation towards 2018 plans that have yet to be announced. 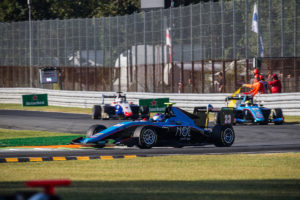 “I would like to thank the Prema Team and organization as well as all of their partners for a solid 2016 and partial 2017 program,” explained Correa. “They are one of the best teams in motorsports and I will miss all my guys and teammates as I move on. Now with the international licensing regulations unable to be rectified, I will shift my focus to the remaining GP3 Series events and do my very best to learn as much as I can as we head into the last quarter of the year.”

Competing with the Jenzer Motorsport squad for the first two events of his GP3 Series career, Correa drove the Autodromo Nazionale Monza last weekend in hopes of continuing his progress up the running order. In what can only be described as terrible weather conditions throughout the racing portion of the weekend, qualifying and the first of two races were cancelled but not before Correa showed an increase in speed during Friday’s lone test session.

Correa continued, “The test session on Friday went very well. I felt more comfortable in the GP3 car and the times proved that. Decreasing the gap to the leader, it was a big confidence boost for not only the team, but also myself included. Though I was fighting for a top-five result in race one, unfortunate contact ended my race resulting from a broken front after being hit by a fellow competitor.” 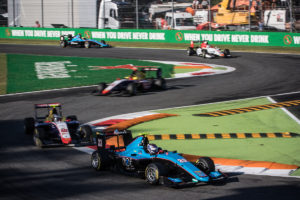 With a one-month hiatus in the GP3 Series calendar, the next event will take place October 6-8 at Circuito de Jerez in Andalucia, Spain.

“Jerez is a long flowing type circuit and a new circuit for me. I am anxious to get back on track and continue my learning process,” added Correa.

JM Correa would like to thank all his marketing partners in 2017 including Jenzer Motorsport, Prema Team, US Performance Academy, Faico-Motriz, NOE Sushi Bar and Bell Helmets.