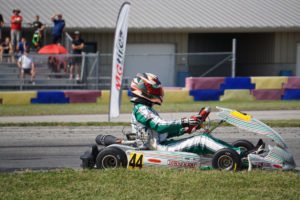 With the final round of the 2019 United States Pro Kart Series taking place only 45 minutes from the Team Supertune race shop, hopes were high for a solid weekend of racing in Indiana. Taking on the New Castle Motorsports Park facility, the Indiana based program secured three podium results, one win, one pole position but had the speed to run at the front of the field throughout the race weekend.

“We definitely had some bad luck that was no fault of our own,” explained Ben Cruttenden. “Kai Sorensen had an engine failure on the final circuit of Saturday’s Mini Swift final while John Burke was caught up in another driver’s incident on Sunday. Disappointing for sure as I am confident we would have had a couple more wins and multiple podiums, but we just need to regroup and work towards our next event.”

Kicking off three straight weeks of racing at New Castle Motorsports Park, John Burke led the way for Supertune in the X30 Junior class. Qualifying 14th on Saturday, Burke drove his way to the front of the field to lead laps and claim the third and final step on the podium. Sunday, while battling for the top spot and running third, Burke was a victim of two karts colliding in front of him as he took evasive action falling to outside the top-20. Working hard to regain lost spots, the Texan was able to march his way back forward to finish 13th. Fellow X30 Junior driver Matt Christensen had a trying weekend but showed pace to run inside the top-ten.

Team Supertune’s best results from this past weekend came from their Mini Swift drivers. After a day to forget on Saturday, all five drivers finished well down the running order due to contact or mechanical issues. Kai Sorensen was leading on the final circuit before an ignition failure ended his race while Anderson Leonard led 12 of 14 laps before contact took him out of the race.

Back to the track on Sunday, Leonard and Sorensen qualified their Supertune prepared Tony Karts first and second Sunday morning and both finished on the podium that afternoon. Sorensen was able to get the best of the field taking the victory and topping the podium blocks while Leonard secured the third step of the podium. Jorge Ortiz narrowly missed the top-ten finishing 11th while Lucas Szabo crossed the stripe in P12. Xander Reed continued to show improvement fighting his way forward both days from his qualifying position.

Cruttenden continued, “We have very little time off as we will be back at New Castle this weekend for the Superkarts! USA Great Lakes Series event and will be on track Tuesday to start testing.”