ONE PODIUM AND FOUR TOP-TEN FINISHES FOR COPELAND MOTORSPORTS 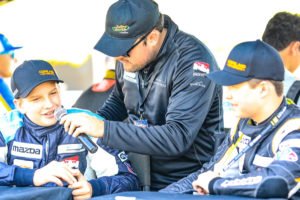 Traveling to the famed Circuit of the Americas (COTA) for the opening round of the Battery Tender Global MX-5 Cup Presented by BF Goodrich, Copeland Motorsports closed the event with one podium, four top-fives and eight top-ten results. With all four drivers finishing in the top-ten in both wheel-to-wheel events, the Copeland Motorsports outfit flexed their muscles and proved that they will be a contender for the 2019 championship chase.

With a less then stellar qualifying effort on Friday afternoon, the team went to work on all four Mazda Miatas to find the necessary speed to compete at the front of the field. Mazda Motorsports driver Michael Carter started his series debut from outside row four while multi-time race winner Bryan Ortiz lined up P9. Teenagers Tyler Maxson and Tyler Gonzalez were just outside the top-ten, but both marched forward when the green flag flew.

In race one on Saturday, a trio of Copeland Motorsports drivers battled in the top-five as Carter and Ortiz both took turns at the pointy end of the field. Maxson marched forward into the top-five before a gearbox issue relegated him back to an eighth while Gonzalez drove forward to record a tenth place result in his series debut.

“We had a shot at a 1-2 finish today but contact forced Michael Carter to give up a position on track,” explained Dean Copeland. “At one point, we had all four of our drivers in the top-eight, and to have all of them finish in the top-ten is a true testament to our overall program.” 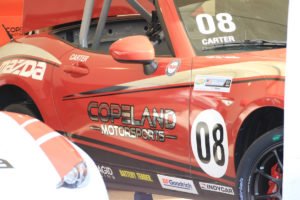 Sunday would see much of the same for Copeland Motorsports as Bryan Ortiz and Michael Carter battled at the front. Ortiz was the highest finishing Copeland Motorsports driver with a fifth place result while Carter chased him across the line in sixth. Tyler Gonzalez ended his weekend in ninth and was named the Hard Charger of race two while Maxson added his second top-ten of the weekend after a gearbox change overnight.

Copeland continued, “We will head back home and start our preparation work for the next event. With the same four drivers ready to attack in rounds three and four, we also have one opportunity for a driver to race in one of the Copeland Motorsports prepared house cars in Alabama.”

With only one weekend off, Copeland Motorsports program will be back on track at the Barber Motorsports Park over the April 5-7 weekend for the next event in the Battery Tender Global MX-5 Cup Presented by BF Goodrich.