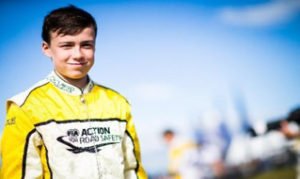 Continuing to expand their program, Team BENIK is pleased to confirm 15-year-old Oliver Clarke as their newest driver. Set to take on the F4 United States Championship Powered by Honda field of drivers, the multi-time karting champion will make his North American debut at the first round of the series in late April.

“Oliver has had major success in the karting ranks in Europe and we look to help him continue those results in North American open wheel competition. With a few solid days of testing already under our belt and showing great speed, we have decided to forgo the series test and concentrate on our preparation for the 2018 season,” explained Nick Mitchell, Manager for Team BENIK. “Fast, marketable and already a champion, Oliver will be an instant threat for race wins, podium results and the championship.”

Clarke, a graduate from the European karting ladder, has been racing since the young age of eight and garnered podiums and race wins in 2017 in the OK MSA British Championship as well as the European Championship. Moving to the Senior ranks and taking advantage of the CIK-FIA licensing rule, Clarke was able to competed against adult drivers and professionals in kart racing to further his advancement. Prior to last season, Clarke was able to amass more than fifty podiums and has raced at the highest level of karting all over the world with huge success. 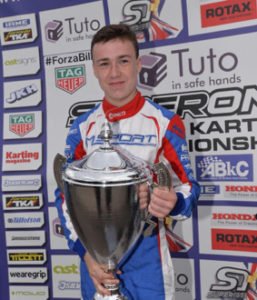 Obtaining cars late in 2017, Team BENIK has gone through a rigorous testing program over the winter months to prepare for the 2018 racing season. Now, with Clarke confirmed to pilot one of their Crawford Composites built F4 machines, the Florida based team can shift their focus to preparing their new driver for the fast approaching season.

“I am delighted to be moving from karting to F4 in the United States and joining BENIK,” explained Clarke. “I am very happy to be working with such an experienced group of guys and can’t wait to get back out in the car and do some more testing. Hopefully a strong first season to come.”

Daniel Mitchell, Engineer for Team BENIK added, “I look forward to having the opportunity to work with Oliver. He has a great resume and his skills behind the wheel are second to none. He will be a great fit to our F4 program and an awesome additional to Team BENIK as a whole.”

For more information on BENIK, please contact Nick Mitchell or Daniel Mitchell via e-mail to Info@Benik-Kart.com or by phone at 754.206.4870.