NOAH BAKER CLAIMS A PAIR OF PODIUMS FOR SUPERTUNE 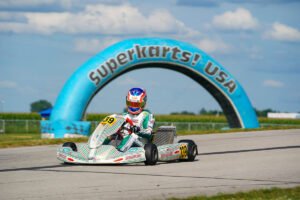 Descending on New Castle Motorsports Park for the final event weekend of the 2021 Superkarts! USA (SKUSA) Pro Tour, Supertune was looking to cap off the program victorious. While the Indiana based Tony Kart team failed to reach the top step of the podium, they did however turn heads with their speed and progress throughout the race weekend clawing their way into contention in both rounds five and six of the six race series.

Noah Baker led Supertune with a pair of podium results as he ran at the pointy end of the grid in both KA100 Junior and X30 Junior. Baker’s first podium result came in the X30 Junior class as a seventh-place finish in the prefinal and the fastest lap of the race set him up for a good run at the win in the day’s main event. Again, moving forward in the day’s final, Baker climbed to the third and final step of the podium. In the KA100 class, a seventh-place qualifying result on Saturday yielded a fourth-place finish in the prefinal before a sixth-place result in the main event. Trouble in Sunday morning’s qualifying session saw Baker line up 31st for the prefinal but a 21-position gain and a tenth-place result honored him with the biggest mover notation. Advancing another seven positions in the day’s main event, Baker ended his weekend with a third-place podium result.

With one fellow Supertune driver in the KA100 Junior class, Baker was joined by Inaki Goicoechea who had a consistent weekend. In his first weekend with the Indiana based Tony Kart program, Goicoechea improved from his 18th place finish on Saturday to advance five more positions up the running order on Sunday to cross the stripe in 13th. 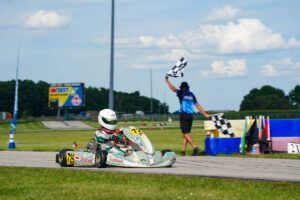 Kai Sorensen returned to Superkarts! USA competition with a vengeance and was a threat for the win in X30 Junior all weekend long. After qualifying fifth and finishing second in Saturday’s prefinal, Sorensen was the first driver to the checkered flag in the day’s main event, but a post-race penalty relegated him to fifth. Sunday saw the Californian come from 24th on the grid to finish 18th in the prefinal and gain another nine positions in the main event to claim his second top-ten result of the weekend. Fernando Luque gained eight positions throughout Saturday’s wheel-to-wheel action to finish 17th while Sunday saw him run into some bad luck in the day’s final and fall down the running order for a 26th place result.

Santiago Duran scored Supertune’s best result in the Mini Swift class as he started 24th for Saturday’s main event and was the biggest mover of the race advancing forward to finish tenth. Sunday saw another twelve-position gain in the day’s final as he was able to secure a 14th place finish in the talent filled class. 2021 multi-time race winner Diego Ardilles had a difficult Saturday that saw him fail to reach the checkered flag, but he returned Sunday to finish 13th. Haopeng Zhang flew the Supertune flag in X30 Senior finishing 28th on Saturday but contact on Sunday forced him to the sidelines.

“All we can do is look forward to the next one and try again,” explained Supertune’s Ben Cruttenden. “We showed speed and our drivers were able to move forward often, but some on track penalties and bad racing luck hurt on final finishing positions. We have a few big races left this season and our goal will be as it always has, win.”

For more information on Supertune, race team opportunities in 2021, OTK product sales, or engine and dyno services, please contact Ben Cruttenden at 317.900.3141 or via email to Ben@Supertune.us.