Wrapping up seven weeks in a row of intense competition, Team BENIK and BENIK Kart would head to Spiceland, Indiana for World Karting Association (WKA) and SuperKarts! USA (SKUSA) action. Taking place at the ultra fast New Castle Motorsports Park facility that has been the breeding ground for some of today’s motorsports stars, Team BENIK and their large contingent of drivers showed that they are the team to beat in Micro and Mini competition.

With the WKA Manufacturers Cup taking place two weeks ago, Saturday’s wheel-to-wheel competition would start out nicely for Team BENIK as Reece Gold, Santiago Trisini and Elio Giovane would claim the first three positions in Pro Swift Sportsman qualifying. Progressing through the heat races and on to the day’s main event, Trisini would have some issues while Gold and Giovane held starting in first and third claiming the victory and a pair of podium results. 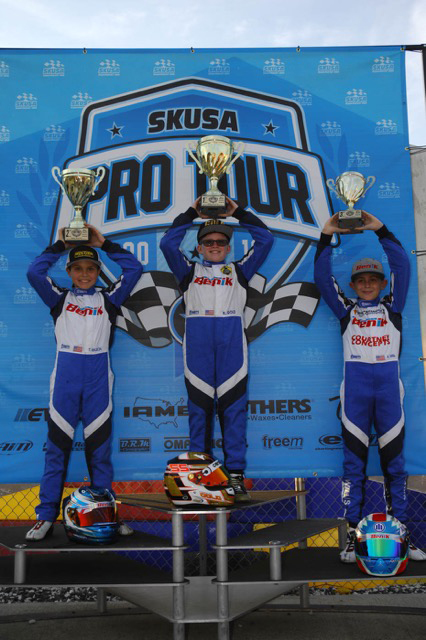 Sunday would be much of the same for the podium duo from the day before as they swept the front row in qualifying. While results would change by the end of the day, it was a top-four sweep for BENIK as Gold would take his second victory of the weekend ahead of Trisini while Tyler Maxson and Anthony Willis would make their way to the front of the field and finish third and fourth.

Utilizing the WKA event as a tune up for the SKUSA SummerNationals, Team BENIK would kick off their last weekend of a seven week road trip in dramatic fashion. Gold would once again be the best of the team taking Saturday’s pole position, but the talk of the paddock was the total domination by the BENIK brand in the day’s main event. Gold would take his third victory in as many main events as Tyler Maxson, Anthony Willis, Luca Mars, Elio Givane and Devin Gomez all made their way to the front. Keeping all of their competitors at bay, BENIK would sweep the top six positions when the final checkered flag would fly.

Looking to repeat Saturday’s success on Sunday, the only driver to do so was Reece Gold. Scoring yet another victory and dominating the New Castle Motorsports Park facility over the past two event weekends, Gold was on fire and is a favorite in championship battles as the 2016 season hits the latter stages. Five BENIK Kart drivers would end their day in the top-ten, a feat in itself in the forty kart strong IAME Mini Swift division.

Team BENIK would also like to congratulate Elliot Cox on his victory in the IAME Micro Swift class during Sunday’s SKUSA competition. After being fast in several events leading up to the SKUSA SummerNationals Cox claimed the pole position and showed speed throughout the weekend, breaking through Sunday in what could be called the biggest win of his karting career.

“It has been a long but successful seven weeks for us,” explained BENIK Karts Nick Mitchell. “I would personally like to thank all BENIK Kart team drivers, mechanics, team members and all involved. Without the team around us, none of this would be possible.”

For more information on BENIK Kart, please contact Nick Mitchell or Ben Cruttenden via e-mail to Info@Benik-Kart.com or by phone at 754.206.4870. For all West Coast Sales, please contact Nash Motorsportz at 951.233.3431 or via email to nashmotorsportz@yahoo.com or through their Facebook. Kartworkz is also an authorized BENIK Kart dealer and will be servicing the Northeast region of the country. Please visit them online at www.Kartworkz.com, or contact Jerry White at 570.237.1095. Charlie Swayne and Iron Rock Motorsports can be reached here or by phone 512.773.3873. Acceleration Karting is the newest dealer for the BENIK brand and they can be reached online at www.AccelerationKarting.com.