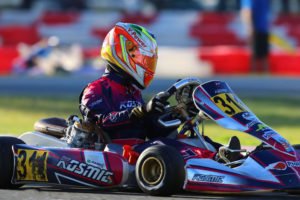 With the final round of the 2018 ROK Cup Promotions Florida Winter Tour complete, talented drivers were crowned at the Orlando Kart Center this past weekend in Central Florida. The North American / Brazilian NF Piquet Sports team has once again shown their strength and power with a total of seven drivers racing in the ROK Junior, ROK Senior and ROK Shifter Senior classes with great success.

In the ROK Shifter Senior class, NF Piquet Sports had the privilege to line up with the most long-lived Formula 1 driver in history, Rubens Barrichello. Once again, he proved that age is only a number as he led one of the three heat races, eventually closing the weekend with a solid third place podium result.

The ROK Junior class featured four NF Piquet Sports drivers and three of them would run among the top-ten in Sunday morning’s prefinal. Fefo Barrichello ended his day with a sixth place finish while Pipe Bartz and Joao Matos would battle inside the top-ten with Bartz scoring a 14th place finish. Rafael Dias, a rookie in his first international race as a Junior and who also led one of the heat races, had a technical issue and was forced to retire from the race.

Dudu Barrichello and Diego Ramos, representing the NF Piquet Sports colors, were two of only five contenders in the ROK Senior category that had a mathematical chance for the overall series Championship. After scoring the pole position, the eldest son of Formula One star Rubens Barrichello would stand on the podium in the third position and celebrate the end of the series in the Vice-Championship position. His friend off the track and teammate on it, Diego Ramos, received the checkered flag in first on nothing less than a performance of perfection. After celebrating his victory, Ramos was then excluded from the results with a claim of having his mechanic carrying a tool on the pre-grid before the start of the main event. 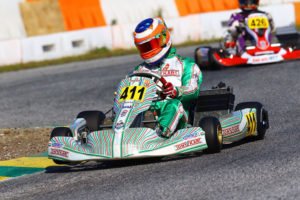 “First off, we would like to congratulate each one of our seven drivers for their great performances. They have all shown great development throughout the three rounds of the Florida Winter Tour,” expressed Andre Nicastro, Co-Owner of NF Piquet Sports. “We were also proud to have the opportunity to help and watch Dudu’s performance with the pole position and a heat race win, as well as with Diego’s win at the main event. The team as whole has demonstrated its competitiveness and we had drivers leading the course in each one of the classes we participated in. At NF Piquet Sports, each one of our drivers has the same equipment and same fighting chances to win because our focus is to be have them all at the front of the field. To Rubens, we thank you from the bottom of our hearts for believing in our capacity as a team. We also extend our thank you to OTK USA, Kosmic Kart, KGT Italia/ Stefano, and Legree Motorsports for the partnership, in addition to Dennis Dirani for the indispensable data analysis and all the crew for their incredible work. We are currently revisiting our calendar and will soon announce our series of focus and concentration for the remainder of the 2018 season.”