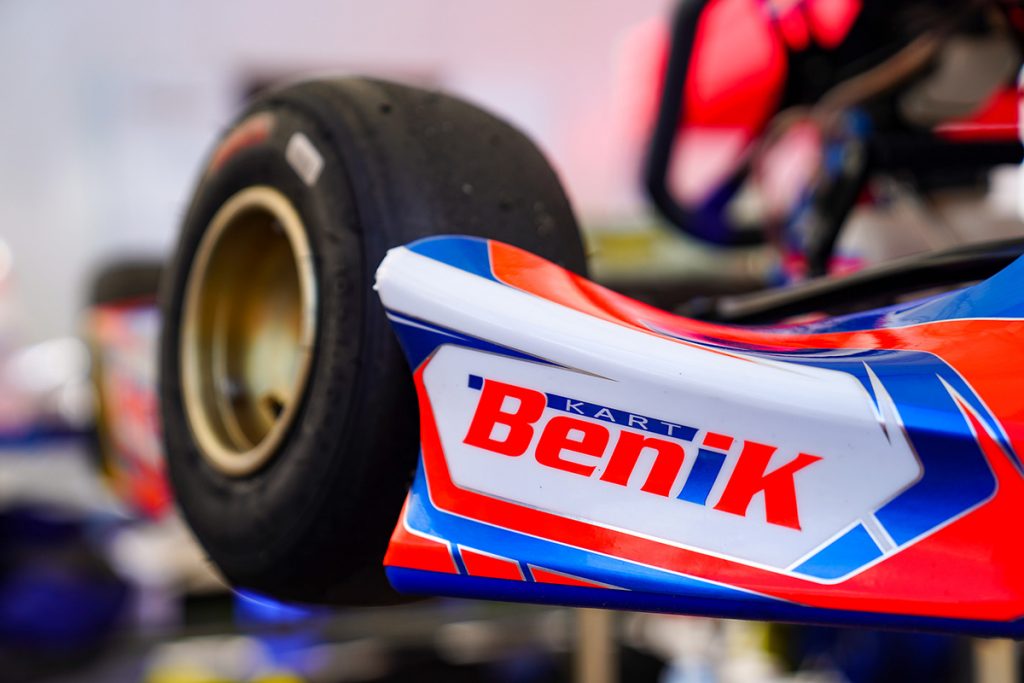 It was off to Mooresville, North Carolina for rounds three and four of the United States Pro Kart Series at the racy GoPro Motorplex. Bringing a large contingent of Team Benik drivers, results were plentiful for the Florida based program as drivers from multiple categories found their way into the top-ten on the results sheets throughout the event weekend.

Progressing through Thursday’s practice sessions and Friday’s qualifying that would set the grids for Saturday and Sunday’s prefinals, Enzo Vidmontiene would lead the field on Saturday once the wheel-to-wheel racing commenced. Improving from his ninth-place qualifying effort in the X30 Pro Junior class, Vidmontiene scored a top-five result for Team Benik in fifth. Looking to have bettered his result on Sunday crossing the line in fourth, Vidmontiene was hit with a push back bumper penalty post-race that relegated him to eleventh on the results sheets. Michael Costello earned a 14th place finish on Saturday but Sunday he showed his true skills. After a DNF in the prefinal that would see him start 44th, Costello drove to the 15th position and was named the Biggest Mover of the race. Junior driver Gavin Whitt continued to show his steady improvement running inside the top-20 throughout the weekend with a best result of 18th.

Michael Costello joined Beckham Toupikov in the KA100 Junior class as the pair hovered around the top-ten throughout the weekend. Costello crossed the line 13th in both main events but was scored 21st on Sunday after a post-race penalty. Toupikov, who had just leveled up from the Mini Swift category, used the weekend to come to grips with the full-size chassis as he gained experience in the junior ranks.

Dalton Hanes would pull double duty on the weekend competing in both X30 Pro and KA100 Senior as he battled near the front of the field. In the Pro ranks, a top-ten performance on Saturday was hindered by a post-race penalty that would see him classified in 13th. Returning Sunday with a vengeance, Hanes was able to finish ninth in the prefinal and advance to fourth in the day’s main event. In the KA100 Senior class, the Team Benik driver was consistently in the top-ten throughout the event weekend earning a ninth-place finish on Saturday and his second fourth place result of the day on Sunday.

Royce Vega also scored a pair of top-ten results for Team Benik. After a solid sixth place finish on Saturday, Vega was forced to come from the tail of the Micro Swift field on Sunday as he continued to show his race craft. Gaining more positions than any driver on track, Vega drove into the top-ten to finish eighth. Troy Ferguson showed the pace he needed to run in the top-ten but a pair of incidents in both Saturday and Sunday’s finals hindered any chance of a good finish.

Kai Johnson would pilot a Benik chassis in the Mini Swift class and have instant success with the popular cadet sized chassis. With a second-place result in Saturday’s prefinal, Johnson hoped to take the win in the main event, but contact forced him to retire. Returning Sunday and showing his speed, Johnson was able to take the prefinal victory and stand on the second step of the podium during the weekend’s main event. Paul Hart would also fly the flag in the Mini Swift class and while his weekend was full of ups and downs, he will now shift his focus to the next event.