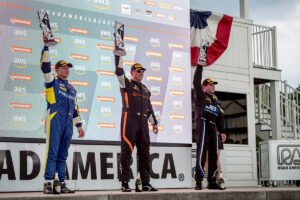 It was a weekend filled with a pair of podium results for GMG Racing’s Jason Bell as he nearly mastered the 4.014-mile Road America facility. Competing in both the GT America Powered by AWS and the Pirelli GT4 America SprintX programs, Bell garnered two podium finishes and four top-ten results in four races at the prestigious Elkhart Lake, Wisconsin natural terrain road course.

After completing the one and only practice day on Friday, Bell went into Saturday morning’s qualifying session with high hopes. Racing alongside Andrew Davis in Pirelli GT4 America SprintX, the duo earned a top-ten starting spot as Bell also had a similar run in his GT4 effort.

“Qualifying was not exactly what we wanted but once we got into racing, we were able to move forward,” explained Bell. “The GMG Racing guys made some positive changes that went in the right direction for what we needed out of the car and the Aston Martin was on rails for the rest of the weekend.”

Finishing seventh in the SprintX race on Saturday afternoon racing alongside Davis, Bell’s first podium of the weekend came from his solo effort in the GT4 class where he was able to drive to a podium result in third. Repeating his performance on Sunday morning, Bell was once again on the blocks with a second-place effort, his second podium result of the weekend. With the second SprintX race that afternoon to finish the weekend’s wheel-to-wheel competition, the Bell and Davis duo earned an eighth-place finish and his fourth top-ten result of the weekend.

Bell added, “It is great to be back on the podium and add to my resume, but also the results of GMG Racing and Aston Martin. Also, we had a new partner this weekend in MovoCash, so to show them our speed and provide solid results on the first weekend of working together is great and I look forward to a long working relationship.” 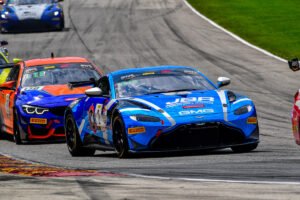 Jason Bell will enjoy just over two and a half weeks off before his next event at the famed Watkins Glen International Raceway over the September 17-19 weekend.