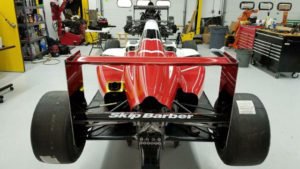 While Momentum Motorsports was on track with driver Kent Vaccaro at the second F4 United States Championship Powered by Honda Series Test, the premier race team continued their promotion of the team and program. Having a car displayed at the famed New York International Auto Show, Momentum Motorsports also traveled to Carolina Motorsports Park for this past weekend’s F-Series GearUp Challenge to actively promote their Karts to Cars program with DRT Racing.

“We have been running full throttle lately,” explained Momentum Motorsports Owner Phil Picard. “I had to make sure that we had a car prepared and wrapped for the New York International Auto Show all while prepping a car for the F4 US test in New Orleans. On the way home, I attended the F-Series GearUp Challenge and provided a car trackside for people to view, sit in and take photos of. I was also in attendance to answer any series or team related questions.” 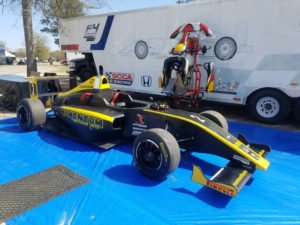 Picard continued, “We are working to secure a deal that we hope to have announced in the very near future with the new owners of Skip Barber. It was a big undertaking to rewrap one of our Momentum branded F4 cars to the Skip Barber colors and livery but it was worth it to be part of the prestigious New York International Auto Show.”

With a busy two weeks now behind them, Momentum Motorsports will prepare for the first event weekend of the F4 United States Championship Powered by Honda. Kicking off April 26-29 at the Virginia International Raceway in Alton, Virginia, Momentum Motorsports has one seat available for a driver looking to compete in the complete season or looking to try their hand in formula car driving.