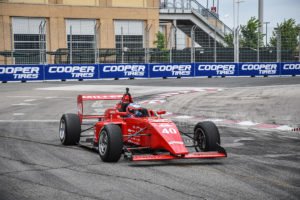 Just a few hours away from Miller Vinatieri Motorsports’ home base, the Cooper Tires USF2000 Championship rookie drivers will be taking on the Mid-Ohio Sports Car Course in Lexington, Ohio this weekend alongside the rest of the Road To Indy program and the NTT IndyCar Series. The natural terrain road course will test the young drivers’ abilities with high-speed flowing corners, tight turns and several elevation changes.

“Many of the tracks we have been to so far this season have been brand new to both Jack William Miller and Eduardo Barrichello, and they have often had very little practice time,” explained team co-owner Jack Miller. “Fortunately we were able to participate in a few test sessions at Mid-Ohio last month, and we will have three more on Thursday before the weekend officially begins. This being their rookie season, any extra track time is a valuable asset to our drivers.”

While the season so far has been full of learning opportunities and new experiences, Miller and Barrichello have shown speed throughout the season and have both earned top-ten results. At the last race in Toronto, Miller finished ninth and Eduardo has been in the top-ten at both Road America and the Indianapolis Grand Prix.

“Both of our drivers have shown that they have the ability to perform near the front of the field, and we are only expecting them to improve with time,” Miller continued. “They have had to learn a lot this season and are becoming more experienced racers each and every weekend.”

While the Streets of Toronto event crossed the halfway point for the Cooper Tires USF2000 Championship, Miller Vinatieri Motorsports is beginning early plans for 2020. Acquiring an Indy Pro 2000 car, MVM will look to run three cars at the end of the season Chris Griffis Test at the Indianapolis Motor Speedway. Interested parties are asked to contact Info@MillerVinatieriMotorsports.com.