Jay Howard’s Motorsports Driver Development program (MDD) made their Formula 4 program debut on track two weekends ago at Homestead-Miami Speedway for the opening round of the United States F4 Championship. The youngest, most inexperienced F4 team in the series made great strides at their first event in the program’s inaugural season, proving they have already developed the skill needed to be a competitive force on track. 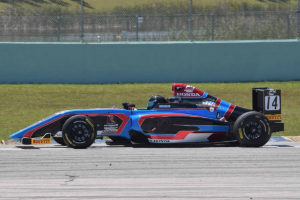 The MDD team hit the track with a four driver line-up: Sam Paley, Max Peichel, Parker Locke, and JP Southern. The team started the weekend off strong, scoring the second fastest time in official practice. In qualifying, three of the four drivers qualified in the top-ten out of the 33 car field-including Paley in fourth, Peichel in seventh, and Locke in eighth while Southern was the only MDD driver outside the top-ten, failing to qualify due to an electrical issue. In the final race, the team posted the two fastest times of the race. The results on paper did not reflect the team’s real success at the event, making huge strides of improvement throughout the weekend.

“I might have the youngest and most inexperienced driver lineup, but I have a bunch of very intelligent kids that are very coachable,” says team owner Jay Howard. “I am extremely proud of their progress since we started the F4 campaign. I have high hopes for the team as we move through the year.”

MDD will be testing at a variety of different tracks prior to round four of the F4 Championship taking place at the Indianapolis Motor Speedway (IMS). Team owner Jay Howard will be returning to IMS in the role of team owner shortly after competing in the Indy 500 as a driver a few days prior.

Jay Howard and MDD would like to thank everyone involved in making the F4 debut a success: the crew, drivers and sponsors including Team One Cure, Lucas Oil, NOLA Motorsports Park and Green 1. The team would also like to thank the F4 Championship, SCCA Pro Series, Honda HPD, Pirelli and Onroak for a great season opener in South Florida.

For more information on Jay Howard’s Motorsports Driver Development program, please contact him via e-mail to Jay@JayHoward.com or visit him online at www.JayHoward.com.