Mark Motors has signed Roman De Angelis to their team for the 2017 season. Just one week shy of his 16th birthday, this young racer from Belle River, Ontario has been given a set of keys for a Porsche GT3 Cup car. De Angelis will be one of the youngest, if not the youngest, Canadian to ever compete in the Ultra 94 GT3 Cup Challenge by Yokohama.

“I am so honored to be part of the Mark Motors racing team this year,” says Roman De Angelis. “The idea of racing GT3 Cup has always been a dream of mine. It is the best birthday gift I could have ever imagined. I have known Marco Cirone for over 10 years – my first Cup Car lap was with him at Mosport during our 6thGear track day event. From that point on, I knew this was the direction I wanted to pursue. Zach Robichon was also a huge help to me last year while racing with Brian Graham Racing in the F1600 series. I am so excited to have two great mentors and coaches as teammates this year.” 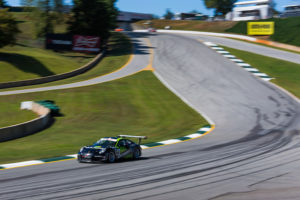 The Ultra 94 GT3 Cup Challenge series will include six race weekends, as well as a few selected US events. It is also showcased at major events, such as the Toronto Indy and the Montreal Formula One weekend. Roman will also continue to compete in the F1600 series under the Brian Graham banner.

“We have been watching Roman’s progression over the past few years, in both karting and under Brian Graham in the F1600 series, and have been very impressed with his level of commitment and success in those respective series,” says team principal Liza Mrak. “Having competed recently in a 500 mile endurance race with co-driver and Mark Motors driver Marco Cirone, it was evident from their impressive second place result that Roman displayed the maturity needed to compete at this level. We are excited to have him as part of the Mark Motors family and joining our stellar line up of Marco Cirone and Zach Robichon, both of whom have been part of Roman’s progression over the past few years.”

“I cannot thank everyone at Mark Motors enough for this opportunity, and am looking forward to a very competitive and successful 2017 season,” continued De Angelis. “I have been blessed throughout my racing career to have the support of great people, such as Koene USA, Brian Graham, 6thGear, ANSA Motorsports, and of course my father, who has stood by me in all aspects of motorsports and has helped me find that balance between my racing career and my school activities. I just hope I pass my drivers exam next week!”

To keep up to date on all the action, follow us on our Twitter at @markmotors_race, or Instagram at @markmotorsracing or on Facebook at facebook.com/MarkMotorsRacing. The races will be available for a live stream on imsa.com so make sure to follow along to not miss any of the updates.