Canadian Marco Kacic has officially signed with Exclusive Autosport for the 2018 racing season. After joining the team in 2017 as a development driver, Marco will now join the team on a full-time program and compete in the 2018 Formula 1600 Tour and the Toyo Tire Formula 1600 Series. The now 14-year-old competitor is anxious to start official competition with several goals set for his first full season of open wheel formula car racing.

“I’m so excited to take the step from karts to formula cars,” expresses Marco Kacic. “There is no way this would be possible without my amazing partners; Electra Meccanica, Kleentech, Guayaki Organic Yerba Mate, ORG race suits, Exclusive Autosport and most of all, Jerry Kroll, CEO of Electra Meccanica. Thank you so much for having faith in me and believing in me. 2018 is still more than three months away but I am anxiously awaiting its arrival.” 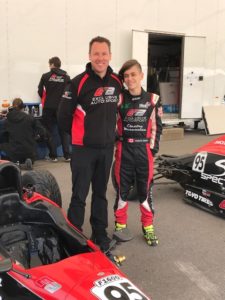 In 2017, Kacic continued competing in karts as well as was assigned the development driver role in the Exclusive Autosport testing program. Behind the wheel of an F1600 machine for several test days, Kacic began to develop his formula car skills and relationship with the team with 2018 in mind. Currently 14 years of age and not breaking the mark of a 15-year-old until next year, the British Columbia resident is going to enter the season as one of the youngest, if not the youngest driver, to be racing in the series.

“I have worked in the past with young drivers such as Scott Dixon, Greg Moore, Ryan Hunter-Reay and Scott Sharp, and I feel that Marco has what it takes to be the next great motorsports champion,” explains Jerry Kroll of Ascend SportManagement Inc., Manager of Marco Kacic. “He has incredible natural ability that will be refined in the next year with the very highly regarded Exclusive Autosport program. I look forward to personally watching his development in the coming years towards his goal of being a World Champion. I cannot emphasize enough the potential that I see in this exciting young driver.”

“We are really excited about Marco joining the Exclusive Autosport (EA) program in 2018 as a full time driver in the Formula Tour 1600 Championship as well as the Toyo Tires F1600 championship,” comments Michael Duncalf, Owner and Operator of Exclusive Autosport. “In addition to Marco’s rigorous karting program this past year, he has also participated in our driver development program. He immediately acclimated himself to our Spectrum Honda F1600. Through working with EA engineers, coaches and having the opportunity to work with our veteran team drivers, he was able to instantly progress and develop a critical and solid foundation in the open wheel car.”

Duncalf continues, “We have an aggressive program in place for Marco starting in 2018. I am confident he will be challenging up front and represent Exclusive Autosport and his sponsors in the highest regard all year long. The future in motorsports is bright for Marco and we are excited to be a part of it.”

Exclusive Autosport has created a development program specifically designed for karters transitioning from the kart ranks into open wheel formula cars. A rigorous testing program, coupled with the team’s internal ladder system, are key components of the Exclusive Autosport development program. 2017 was spent testing and working very closely with team personnel to not only gain valuable seat time, but also to learn the inner workings of the team, the car and the dynamics between driver, engineer and other team members.