MARCO KACIC ENDS 2016 CHALLENGE OF THE AMERICAS AS VICE-CHAMPION

Canadian Marco Kacic started his 2016 race season by competing in the Challenge of the Americas (COTA) winter series. This season Marco has been blessed with the support of some of the sport’s top companies. If it were not for his partnership with his sponsors, CRG Nordam, Black Racing Engines and Fikse Wheels, it would not have been possible for Marco to race at the Challenge of the Americas this year. 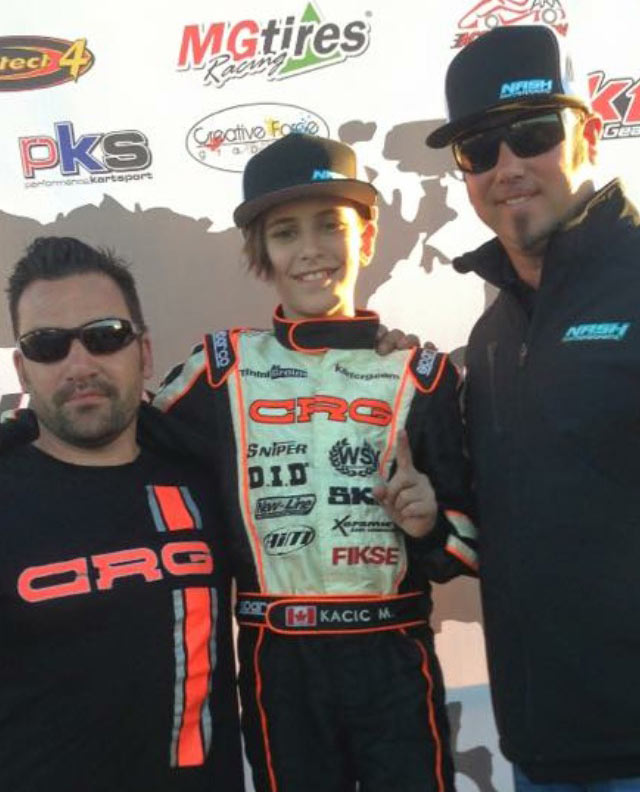 For 2016 Marco is back on a CRG chassis as a CRG Nordam factory driver. Marco is thrilled to be driving a CRG Hero 1010 chassis in the Rotax Mini MAX class this year; much of his 2016 success is due to driving one of the best chassis on the market. Marco has been racing on a Black Racing Engines prepared motor for several years and the performance and service has been fantastic. With the constant developments coming out of the Black Engines shop and the trackside tuning services the Black Engines Team provides, Marco is able to focus solely on his driving. Marco also started a partnership with Fikse Wheels last year and he is very proud to be representing them. Fikse Wheels not only sponsors some of the top karting series in North America, but they also offer some innovative driver sponsorship programs.

At the first 2016 COTA race weekend in Tucson, Arizona, Marco scored a perfect weekend by winning the prefinal and final on both Saturday and Sunday. Rounds #3 and 4 took place the following month in Phoenix, Arizona. On Saturday, Marco got crashed out in the first corner and recorded a non-finish. For Sunday’s race Marco returned to his winning ways and won both the prefinal and final. The last COTA round took place early this month in Sonoma, California and Marco headed into the weekend with a substantial championship points lead.

During Saturday’s race the unthinkable happened: Marco lost a chain and recorded another non-finish. This was definitely a big blow to his points lead. Although Marco was still the points leader heading into Sunday, he would need a solid race day to take home the championship. Marco started off Sunday with a strong qualifying run and put his CRG off pole. In the prefinal Marco had contact with another driver and the worst-case scenario happened once again. Marco had yet another non-finish. Marco would now have to start the final from 11th position.

On the first lap, Marco quickly made a solid charge up the field to the sixth position from 11th, but when passing for fifth position, he went too deep on the brakes and spun. Marco got back on track but found himself in 18th. Marco spent the rest of the final charging his way through the field. Although he set the fastest lap of the race, Marco was only able to make it up to eighth position before the checkered flag flew. This was not quite enough to win the Challenge of the Americas Mini MAX Championship and Marco had to settle for runner-up this year.

“We are extremely proud of what Marco was able to accomplish during the 2016 Challenge of the Americas Series,” states Danny Kacic, father of Marco and owner of CRG West. “Marco had the most wins, most pole positions, and the most fastest laps in the series.”