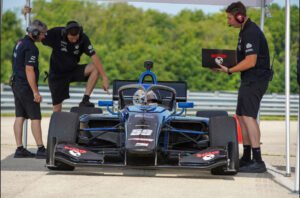 As the 2021 Indy Lights Presented by Cooper Tires Championship season begins to wrap up, HMD Motorsports has filled their vacant #59 entry for the upcoming Portland Grand Prix. Manuel Sulaiman, who has spent 2021 competing in Indy Pro 2000 Championship Presented by Cooper Tires, will be making the move up the Road to Indy ladder to debut in the series.

With six races remaining, the Mexican driver aims to follow a successful career like compatriot Patricio O’Ward and will begin that quest next weekend with HMD Motorsports at the Portland International Raceway. Both Sulaiman and HMD Motorsports have agreed to use Portland and future dates as a testing and learning opportunity in preparation for the next step in the career of the promising, young driver.

“I am very happy with this announcement and for me, this is a very important step in my life as a professional driver,” explained Sulaiman. “Road to Indy and IndyCar are my passion and my dream. I am very grateful for what I have achieved up to now and look forward for more success. The atmosphere and welcoming that HMD has given me in this important upward step I am taking has been exceptionally good, and I am very grateful for the opportunity. I, as a driver, will give everything I have and it is an honor to belong to HMD, a team with an impressive win record In Indy Lights, and my respects to them for their success. Nothing else to say, but I am excited to go racing!”

“We are excited to have Manuel join the HMD Motorsports program,” explained General Manager Mike Maurini. “He had a solid test, worked with three of our engineers and performed very well. The future is bright for him.”

Sulaiman began his car racing career in 2017, earning multiple podiums in the British F4 Championship and FIA F4 NACAM. Through 2018 and 2019, Sulaiman competed in British F4 before becoming the 2019 FIA Fórmula 4 NACAM Series Champion with ten wins and fifteen podiums. In 2019, Sulaiman joined the Road to Indy Presented by Cooper Tires program in USF2000, where he finished sixth, with some podiums in the championship. After spending the past two seasons in Indy Pro 2000, Sulaiman has earned three wins, seven podiums and twenty top-ten finishes and is now ready to make his next move up in the program.

Sulaiman will be joining the team alongside series veteran David Malukas and Global Racing Group with HMD Motorsports drivers Linus Lundqvist and Benjamin Pedersen. With a combined eight wins, twenty-one podiums and seven pole positions between the three current drivers and HMD Motorsports leading the Team Championship, Sulaiman will be in a strong position to learn from some of the top current drivers in the series as he begins to prepare for 2022.