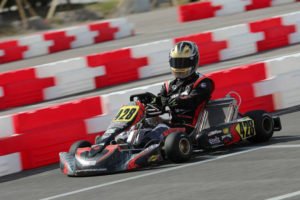 Making a splash in 2018 and carrying that momentum into the 2019 racing season, Croc Promotion USA is three for three in events in January. Taking a pair of wins at the Superkarts! USA Winter Series in Pro Shifter, the Croc Promotion USA brand made it a perfect month topping the ROK Shifter podium at Round 1 of the ROK Cup USA Florida Winter Tour with factory driver AJ Myers, while P2 went to the talented teammate Andrew Bujdoso.

“We are in it to win it,” explained Todd Ulman, Owner of Mad Old Nut Racing, the exclusive Importer of Croc Promotion USA. “We may not be as fancy as some of the other teams, but our kart sure looks great out front, and the drivers look like Tom Cruise on the podium. In all seriousness, what a great start to the season with a talented, hard working bunch of misfits.”

Taking to the track for their first event of the season at the AMR Motorplex in the shadows of the Homestead-Miami Speedway, Croc Promotion USA driver AJ Myers stole the show. Sweeping the weekend’s official session, Myers claimed two pole positions, two heat race wins and two main event victories. Not to be outdone, fellow Croc Promotion USA pilot Andrew Bujdoso ran in the top-five throughout the weekend, battling hard with some of the best shifter kart drivers in the country. When the dust had finally settled and the last checkered flag had flown, Bujdoso ended his weekend with fourth and sixth place finishes in Saturday and Sunday’s main events.

“The Pro Shifter class in SKUSA competition is second to none,” explained Bujdoso. “The team did a great job and the performance in all of our equipment was there. Congratulations to AJ on a dominating weekend, proof the that Croc Promotion USA chassis is at the top of it’s game.”

One week later and with only two branded drivers in attendance, Croc Promotion USA Karting drivers stood on the top two steps of the podium in the talent-laden Shifter ROK field. Starting the main event from the second and fourth positions, Myers and Bujdoso each advanced to take home first and second place hardware. Again, a testament to the team, engines, and equipment, Croc Promotion USA turned heads and received praise from industry insiders. Now, with racing kicking off for the month of February this weekend, AJ Myers and Croc Promotion USA are the championship point leaders in both the SKUSA Winter Series and the Florida Winter Tour.

“It is hard to believe that as a team, we have opened the season with three straight victories,” added Myers. “It is a great way to kick off the season but now the target is firmly on us as we move forward. All we want to do is win, and that is the goal each and every weekend. I think if we stick to the way we are doing things and continue to work together, we will have great success in 2019 and beyond.”

In other news, Croc Promotion USA has a special project in the works that addresses the lack of video experiences on race weekends from both the pit perspective and the viewer at home. Working with team sponsor Mad Old Nut Productions, a Hollywood film and television post production and equipment rental company that works on shows such as The Flash, Gotham, Supergirl, All American, iZombie, Veronica Mars, Blindspot and more, an industry changing idea has been put forth that will revolutionize karting viewership.

Mad Old Nut Racing and Croc Promotion USA will have future announcements about their new and growing program. With product sales, arrive and drive opportunities and much more, interested parties are asked to contact Todd Ulman via email to todd@madoldnut.com. Please like Croc Promotion USA on Facebook by searching @crocpromotionusa and view their website at madoldnut.com.