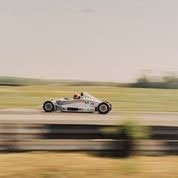 Claiming the Rookie-of-the-Year honors in the F1600 Canada program last season, Mackenzie Clark is set to make his series return in 2020. Joining forces with Brantford, Ontario based Britain West Motorsports and piloting a Honda powered Mygale chassis, there is only one goal in mind in 2020 and that is to claim the overall series title.

“I learned so much in my debut season and feel that anything less than a championship would be disappointing this year,” explained a confident Clark. “Like many drivers, the first part of this year was behind the wheel of a simulator during quarantine. I raced as often as I could to try and stay somewhat sharp, but nothing compares to the real world, so I am anxious to get back on track.”

Looking to stay ahead of his competition, Clark is also training behind the wheel of a 125cc shifter kart, similar to what some of today’s Formula One and IndyCar drivers do between race weekends. A winner in 2020 already, the Canadian standout won the SCCA Super Tour event at Sebring International Raceway earlier this year and will look to carry the momentum from that result to the Canadian F1600 program.

While the championship is the goal in 2020, the MIR Raceline Canadian Academy driver and his partners can’t help but to look onwards into 2021 as they begin to shape the career of the next Canadian star.

“We have looked at the Road to Indy, US F4 as well as some GT programs,” added Clark. “My goal is to win this year and to make sure I am ready for the next step. I want to keep all the doors open and will get behind the wheel of whatever I can as time and funding permits.”

As an honor roll student and aspiring motorsports/mechanical engineer, Clark’s first priority is to become a professional driver. Being selected to compete at the Richard Mille Young Talent Academy program in Lemans, France in November 2019 was an honor. Clark ended up the top North American driver despite being the youngest and least experienced driver in the finale.

For more information on Mackenzie Clark, please contact Stuart Clark at 780.818.8095 or via email to stuart@simplas.ca. Mackenzie Clark can also be found online on his newly released website www.macclarkracing.com and through his social media programs on both Facebook at Mac Clark and Instagram @_macclark.