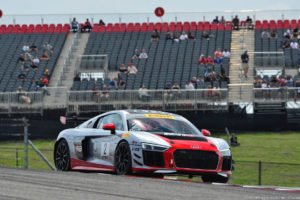 It was a herculean effort by Florida based M1 GT Racing this past weekend at the impressive Circuit of the Americas facility. Competing in the Pirelli World Challenge SprintX GTSA event with Jason Bell, the team overcame a late night rebuild to claim a pair of top-ten results.

Progressing through the Promoters Test Day with speed, M1 GT Racing decided to take Friday’s sessions to experiment with different setups and continue to learn the new Audi R8 LMS GT4. Learning throughout the day, the top level team put the best setup on the car possible for the qualifying session on Saturday morning before wheel-to-wheel racing would take place that afternoon. With an impressive qualifying effort, Bell qualified his #2 Audi R8 LMS GT4 tenth in class and 19th overall.

The start of the first race would be a slow one for the GTS and GTSA field as multiple yellow flags would slow the pace early and often. Gaining a few positions on each restart, Bell advanced forward putting the M1 GT Racing Audi 13th overall and third in class before the halfway point.

“Jason was hit from behind on the second restart and it caused more damage to that car than we originally thought,” explained M1 GT Racing Technical Director Remi Lanteigne. “Jason did a great job during the entire race and kept the car on track and moving forward. With the damage and the loss of downforce, the car was very tricky to drive and Jason was able to bring it home with a sixth place finish.” 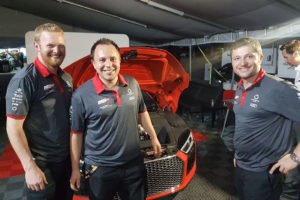 Working until the early hours of the morning, the M1 GT Racing crew went to work on the repairs and prepare for Sunday’s competition. At the track until 3am Sunday morning and utilizing some parts from an Audi R8 street car to complete their rebuild, the crew was able to catch a few hours of rest before the drop of the green flag and the wheel-to-wheel action in race two.

Lanteigne continued, “My guys did a great job in repairing the car and we owe a big thank you to the Audi Sport customer racing for their assistance and support. Sunday saw us start on a damp track with rain from overnight and we chose to start the race on rain tires as we expected multiple cautions due to the damp racing surface. Those cautions did not materialize and Jason was able to hold on for a tenth place finish in the GTSA class, his second top-ten of the weekend.”