With the Pirelli World Challenge (PWC) Championship Finale event taking place this past weekend at Mazda Raceway Laguna Seca, M1 GT Racing would make the cross country trek from their Brooksville, Florida shop, to Monterrey, California with title hopes on the line. Sitting second in the PWC Pro SprintX, Sportsman SprintX and SprintX Team Championship battles, M1 GT Racing looked to take their Audi R8 LMS to the top step of the podium and finish the 2016 season on a high note.

“It has been a busy few weeks for us,” explained Team Principal Remi Lanteigne. “We did a quick two-day test at NOLA Motorsports Park in preparation for the final rounds and learned a lot. That test turned into great speed right off the trailer on Thursday and we were able to carry it through the weekend. Though we did not get the win we wanted, we were able to complete several of our goals and end the season strong.”

Showing great speed during the Promoters Test Day on Thursday, M1 GT Racing turned that speed into a pole position on Friday afternoon as Canadian driver David Ostella stole the show. Turning the fastest lap of the qualifying session, Ostella put the M1 GT Racing prepared Audi R8 on the inside of the front row for Saturday afternoon’s event. Taking the green flag for the first wheel-to-wheel action on the weekend, Ostella would get beat to the first corner but settled into P2 to begin his stint. Pushing the leader early, Ostella had a slight off as the gap opened and he worked to keep his competitors at bay. Holding onto the second spot for his entire stint, Ostella handed the wheel over Dion von Moltke just past the halfway mark.

Lanteigne continued, “When Dion took over, we had some issues with traffic and some on track battles. He is a great driver and did all he could, but we fell back early in the stint and were never able to make up the lost time. By the time the checkered flag flew, we were classified in the eighth position.” 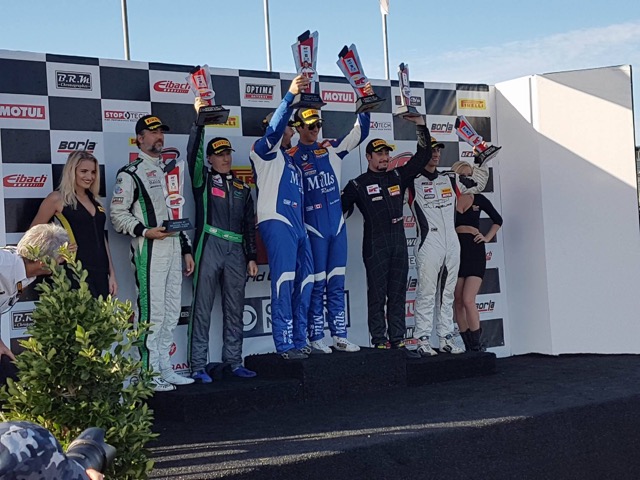 Putting Saturday’s result behind them, M1 GT Racing shifted their focus to Sunday where the team would start inside row three in the fifth position. According to the PWC rules, von Moltke would start the event while Ostella would take the honors at the halfway point.

When the green flag flew, von Moltke attacked early but a scrambled entry into the first corner forced him to the outside and a loss of position. Closing the first lap in eighth and in a group of four cars, Dion battled hard to make up lost ground. As Dion exited corner two early in his stint, a fellow competitor would go off track forcing von Moltke to take evasive action. A high speed spin and hard contact with the tire barrier relegated the Audi down the running order but not out of the race. Back on track and pace with some damage, von Moltke took advantage of a caution and gained on track positions to end his on track duties in P8.

Courtesy of a quick driver change, Ostella would exit the pits in the sixth position and quickly moved into the top four. Turning lap times faster than the leader and looking to close the gap, David attempted a bid for P3 in the final corner and made contact with a fellow competitor. With heavy damage to the front splitter and diffuser of the Audi machine, lap times quickly decreased as Ostella limped the car around the circuit for the final eight minutes. Going just fast enough to maintain his third position gap, Ostella would end the race in P3 as he, von Moltke and M1 GT Racing would celebrate on the podium that afternoon.

“It was a great to work with the Audi Sport customer racing program and to end to the PWC season with a strong result,” finished Lanteigne. “We are now shifting our focus to 2017 as well as some international events including the Sepang 12 Hour in Malaysia and the Bathurst 12 hour in Australia, both part of the Intercontinental GT Challenge. In 2017 we will be pushing hard in the SprintX events in Pirelli World Challenge competition and may even operate a second car for the 2017 season.”