M1 GT RACING AND AUDI ARE VICTORIOUS AT MIAMI 500

Only a short trip from their Brooksville, Florida location, M1 GT Racing travelled south to the Homestead-Miami Speedway for the Formula & Automobile Racing Association (FARA USA) promoted Miami 500. Looking to close out the 2016 season on a high note, the Audi Sport customer racing program did just that as Walt Bowlin, Larry Pegram and David Ostella piloted their 2016 Audi R8 LMS to the victory in the highly touted MP-1A division.

“What a great weekend and solid way to finish our 2016 racing campaign,” expressed Technical Director Remi Lanteigne. “All three drivers never put a wheel wrong all weekend and worked well with one another on car setup and driving instruction. We were able to put together what we learned all year and control the four-hour race running a pace that we felt comfortable with for our drivers and our equipment. Our crew did an amazing job during preparation, driver changes and pit stops. They really gave us the opportunity to be at the front of the field. They are a tightly knit group that works extremely well together both on and off the track which heightens the professionalism and incredible will to win.”

Starting the weekend off right, the M1 GT Racing Audi R8 claimed the pole position on Saturday afternoon. Competing in the MP-1A class but on track with more than 70 other cars, the game plan was to stay close to the front of field and out of trouble over the course of the event.

Taking the reigns for the green flag was Walt Bowlin who did a masterful job keeping the Audi at the pointy end of the field for the first hour of competition. Running consistent laps and hovering in the top three, Bowlin then turned driving duties over to Larry Pegram. The former AMA Superbike rider showed his diversity and speed on four-wheels as he was able to drive the #23 Audi to the front of the field. Both Bowlin and Pegram experienced caution laps and restarts and both held their own against some stiff competition. 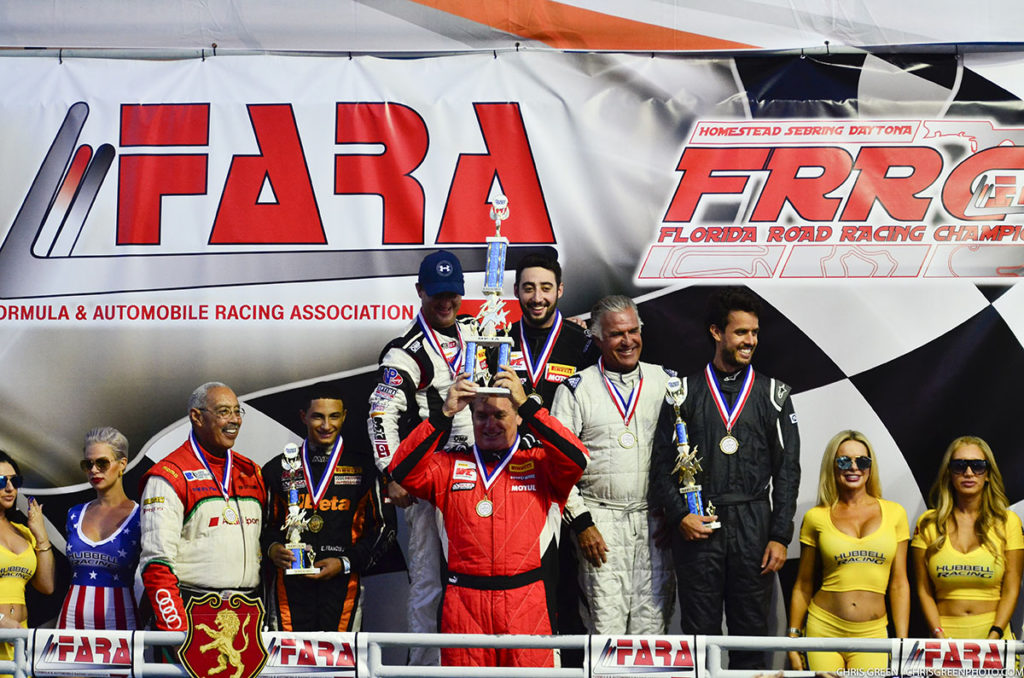 “What a great way to end the 2016 season. We scheduled this race just to go and have some fun but as usual, once we arrived, we had to win,” added Walt Bowlin. “This race has become quite an event and we knew we would have stiff competition. It’s amazing I’m able to come back to Homestead-Miami Speedway and win the Miami 500 in the same venue where I started my racing career. Much thanks to the M1 GT racing crew for making this a special event. I also want to thank my two co-drivers David Ostella and Larry Pegram for doing an amazing job. David put the hammer down in his final stint and really drove the victory home. Thanks to Audi Sport customer support racing for all their help this year. We ended the season with a bang and look forward to 2017.”

Larry Pegram continued, “When you’re doing an endurance race, you always hope for perfection, but know that there will be problems. The M1 GT Racing crew were absolutely perfect and made the job easy for us. I can’t wait to have the chance to drive the Audi R8 again.”

With the first two hours complete, Pirelli World Challenge SprintX Vice Champion David Ostella would climb behind the wheel and drive the car to victory. With quick lap times and often being told by engineers to slow down and save his equipment, Ostella was on point as he took the checkers late Sunday afternoon.

Lanteigne continued, “David has really come into his own as of late. We have helped him push forward in his motorsports career and he has returned the favor with speed and results on the track. He is a young and talented competitor and we are happy to have him part of the M1 GT Racing family and provide him with the opportunities he deserves.” 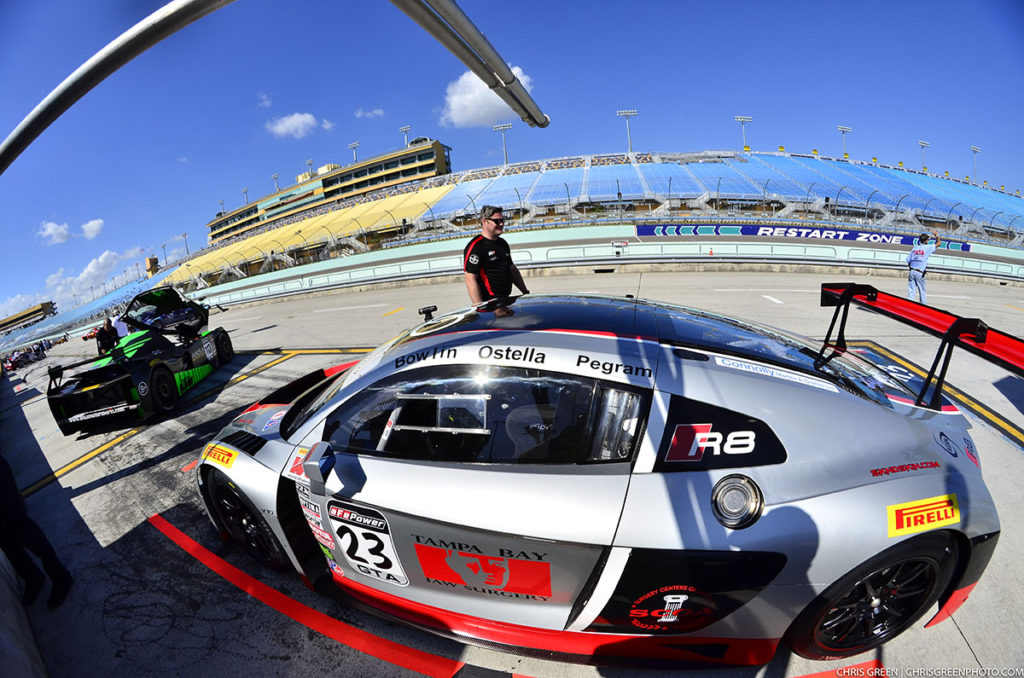 “This was just a fantastic weekend from start to finish. We were quick in qualifying and then in the sprint races, we just focused on dialing in the car to have to right setup for the big race on Sunday,” added Ostella. “Walt had a great start and was able to hold his own out there running consistent lap times which is what endurance racing is all about. Larry jumped into the car second and brought us up into first place for me to take over. Once I jumped in the car I set a personal best lap all weekend and the car just felt like it was on rails allowing me to put it anywhere I wanted to. I’m really happy with the performance of the car all weekend and I think the team deserved this one.”

Ostella continued, “I would like to thank M1 GT Racing for believing in me. The opportunity to be part of their team and the Audi Sport customer racing program has been an experience that is second to none for myself. I am very humble and grateful for the opportunities.”