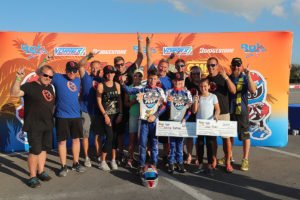 Scoring multiple victories in the Junior category to date in 2019, Speed Concepts Racing (SCR) continued their winning trend as Luca Mars topped the podium blocks in Vortex ROK Junior. Mastering the temporary circuit at the second round of the ROK Cup USA Florida Winter Tour, Mars was at the front of the field throughout the weekend as three SCR branded drivers finished in the top-six. Also adding a pair of top-six results, including a podium finish on the weekend, was Kyffin Simpson in the 100cc Junior class.

“Luca has been the dominant Junior driver of the year so far and it is nice to see him rolling with success,” explained Mike Speed. “We have found something with our Junior program and it is really paying off. We have managed to win with three different Tony Kart drivers in 2019 and look forward to continuing that momentum onwards into the rest of the year.” 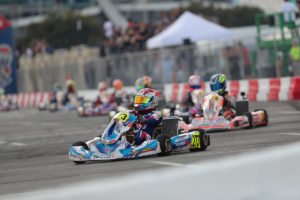 Qualifying in the fifth position, Mars continually improved throughout the race weekend taking a pair of heat race wins and the pole position for Sunday’s prefinal. Dominating both official sessions on Sunday, the prefinal, and main event, Mars is now two-for-two in Florida Winter Tour events in 2019. Luke Lange and Kyffin Simpson also had spirited drives over the weekend as Lange was the biggest mover from qualifying to the end of the main event. Turning the 21st quickest lap on Friday afternoon, Lange stayed out of trouble in the heat races to move forward. When the dust had finally settled at the end of Sunday’s final, the young Texan was only one step away from a possible podium result.

Kyffin Simpson drove with his head and his heart in Miami as the young competitor took part in both the 100cc Junior and ROK Junior divisions. Double the track time means double the information for some, but it also means double the energy for a driver, and Simpson rose to the occasion. Claiming a sixth place finish in the ROK Junior final, Simpson toughed his way through another grueling 18 laps to stand on the second step of the podium in the 100cc Junior class, bringing Speed Concepts Racing their second podium of the weekend.

Canadian driver Justin Arseneau was a model of consistency through the ROK Junior heat races as he finished seventh, sixth and seventh after qualifying inside row four. A hard fought battle and top-ten result in the prefinal was negated in the main event as contact took him out of the running as he was eventually classified in the 29th position. 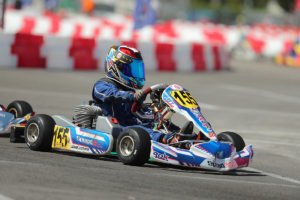 Speed continued, “I really think we had a strong possibility of having all four of our drivers inside the top-six or seven in Junior. I feel bad for Justin and I know that he will rebound at our next event.”

Paul Bocuse showed great speed in the Vortex Mini ROK main event after battling throughout the heat races. Scoring three top-ten results on Friday and Saturday, Bocuse rocketed to the fourth position in the prefinal and looked to have the speed to challenge for the race win.

“Paul drove exceptionally well in the prefinal, and I thought we had something for them in the main event,” suggested Driver Coach Alex Speed. “Unfortunately, some issues relegated him down the running order slightly but he was still able to grab a top-ten result.” 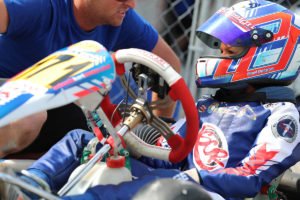 With each passing weekend, Ayden Ingratta continues to show his upward progression, and the same could be said for this weekend in Miami. Though his main event result is not a true testament of the hard work, effort and heat race finishes, the young Canadian is poised to break into the top-ten in the very near future with front-of-the-field results just around the corner.

Speed added, “A huge thank you to our drivers and their families, all of our mechanics as well as Reine Pierson of SwedeTech Racing Engines for our ROK GP Junior race winning power.”