LEGACY AUTOSPORT BACK ON THE PODIUM IN PORTLAND 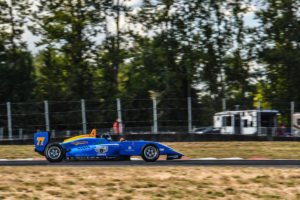 Heading from their shop in Indianapolis, Indiana west to Portland, Oregon, Legacy Autosport was hoping the long cross-country trek would be rewarding. Taking on the Portland Grand Prix in the Cooper Tires USF2000 Championship, team driver Zach Holden delivered a podium result in the second wheel-to-wheel action of the weekend.

“A great job by Zach throughout the weekend,” expressed Mike Meyer. “We rebounded from some less than stellar qualifying performances which put us a little further back than we had liked but, in the end, we worked together as a team and pushed forward.”

After progressing through Thursday’s promoter test day and Friday’s official practice sessions showing great pace, Holden delivered a seventh place result on Saturday afternoon, improving from his 12th place qualifying effort. Bound and determined to improve his end result on Sunday, Holden leveled up from seventh to the podium in a smart and calculated drive forward.

Meyer continued, “Zach has what it takes to be a race winner and a champion in this series. We have our goals set high for the final weekend in California.”

Introducing another new driver to the series, Ayrton Ori made his Cooper Tires USF2000 Championship debut in Portland. With the goal of completing full race distances and gain experience in a race setting, Ori did just that finishing 18th on Saturday, and improved to 16th on Sunday. In the process, Ayrton also decreased the gap to the leaders as he continued to push harder with each passing lap. 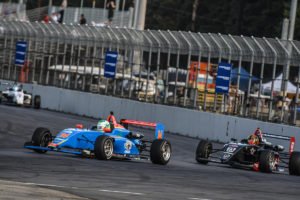 “We have a long-term plan for Ayrton, and it started this weekend in Portland,” added Meyer. “He achieved his goals and brought the car home in both races. We will now evaluate his progress in our off weeks and set new goals for Laguna Seca in two weeks’ time.”

Traveling back to their home base for a few weeks off, Legacy Autosport’s trailer will remain on the West Coast for the September 20-22 event at WeatherTech Raceway Laguna Seca. In the meantime, the growing program will begin to put together plans for the annual Chris Griffis Test set to take place the third weekend in October at the famed Indianapolis Motor Speedway.