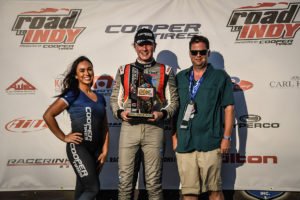 Looking to carry the momentum from their results at the fourth round of the Cooper Tires USF2000 Championship, Legacy Autosport and Alex Baron climbed the running order to secure the second step of the podium this past weekend at Lucas Oil Raceway. Taking on the 0.686-mile oval in Brownsburg, Indiana, Alex Baron improved in each and every on track session and was able to challenge for the win at the conclusion of the Carb Night Classic Freedom 75.

“We had a great test two weeks ago and knew that we had a good car,” explained Legacy Autosport’s Mike Meyer. “We paced ourselves on the race weekend, did not show everything we had right out of the gate and slowly improved all the way until it counted most. Alex drove an incredible event and was challenging for the win on the final restart, but came up just short in the end.”

After claiming the ninth quickest time in Thursday afternoon’s one and only practice session, Baron and Legacy Autosport put it all on the line in qualifying. With the field being set on the average of two timed laps, Baron narrowly missed the pole position by two tenths of a second and found himself back on the inside of row three in the fifth position.

“The USF2000 field is really tight this year, especially on the oval,” explained Baron. “We have a very good race car, better than our times show, and I am confident that I can move forward in the 75 lap race.”

Pacing himself, Baron hovered in the top-five for the majority of the Freedom 75 before applying the pressure after the second of two caution periods. Working hard to keep his tire temperatures high, the Metalloid backed driver knew that his only shot at the win would be to attack on the restart.

Meyer continued, “Alex timed his restarts perfectly and was able to advance forward into the second position after a short on track, wheel-to-wheel battle. We had a good car, but not the best car on track. Congrats to fellow competitor Cameron Shields on a great race.”

Next on the calendar for Legacy Autosport will be a trip north to the Dairy State and Road America for rounds six and seven of the Cooper Tires USF2000 Championship. Taking place on the picturesque 4.014-mile, 14-turn natural terrain road course over the June 21-23 weekend, Baron, Legacy Autosport and the complete Road to Indy program will race alongside the NTT IndyCar Series.