LEADING EDGE MOTORSPORTS CLOSES OUT FIRST QUARTER OF 2016 WITH SUCCESS

As one of North America’s longest running professional kart shops, tuners and race teams, Greg Bell and Leading Edge Motorsports entered 2016 with renewed focus and energy. As a dealer for the Praga chassis line, the Lodi, California based kart shop was poised and focused to challenge for race wins, podiums and championships, and now that the first quarter of the karting season has come to a close, they are proving that goals can be achieved.

“We have had multiple drivers make the switch to Praga and we are doing our very best to ensure they are at the front of the field,” explained Bell. “We have had great success in multiple classes across multiple series so far in 2016, and we will continue to push hard for the results that our customers deserve.”

Kai Sorenson has been one of the top drivers in the ProKart Challenge Micro Swift division as he falls under the watchful eye of Leading Edge Motorsports. In his first event at Buttonwillow Raceway, Sorenson won a heat race and finished on the podium in the main event. Using that to boost his confidence and momentum, Sorenson has since been unstoppable in PKC competition claiming two pole positions and multiple heat race wins on his way to two main event victories.

Moving to SuperKarts! USA (SKUSA) Pro Tour competition, Sorenson continued the results. At the first event in Phoenix just last week, the Leading Edge Motorsports driver claimed Saturday’s pole position and ran in the top-three throughout the heat races eventually ending his main event in second. Sunday would see another strong qualifying effort go by the wayside in the heat races as a DNF would force him to start 27th later that day. Driving through the field like a seasoned veteran, Sorenson salvaged a top-five result finishing fifth. 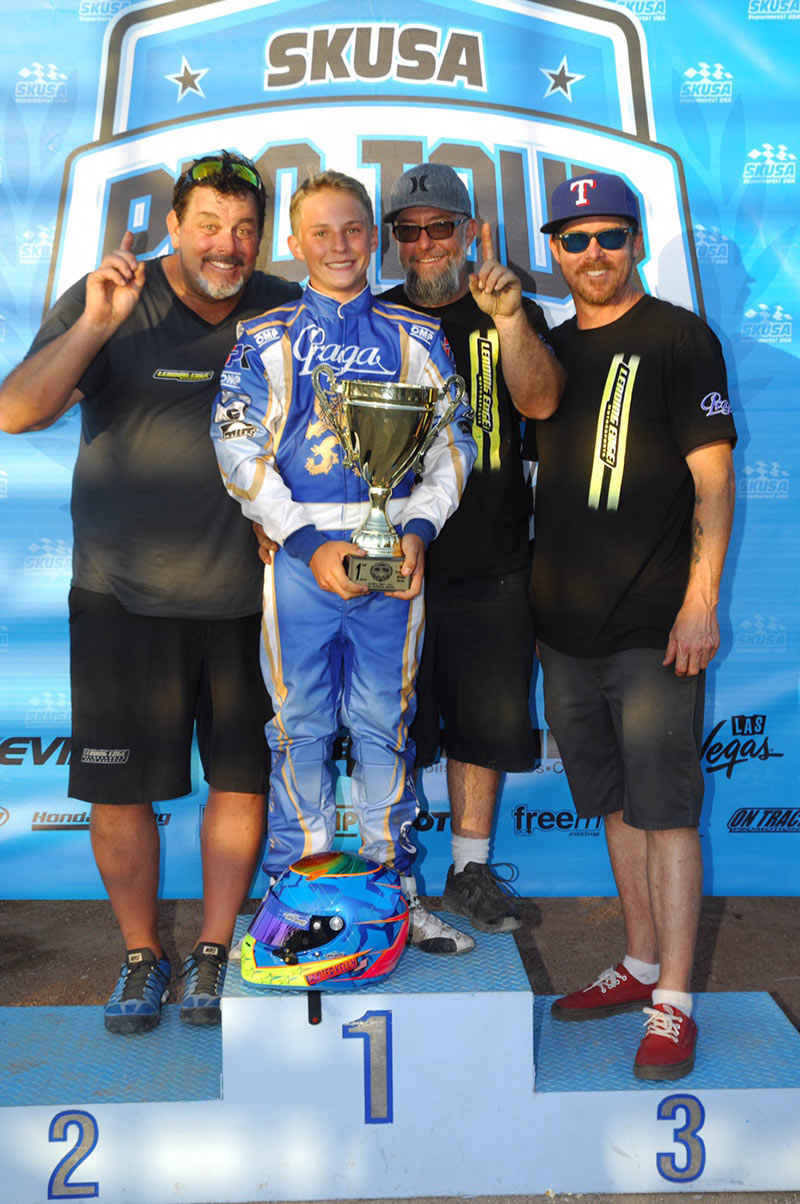 Two drivers would fly the Leading Edge flag in the S2 category as Hunter Kelly and Anthony Freese would see action in SKUSA competition. Freese has shown steady and constant improvement in the ProKart Challenge program where he continues to hone his skills and gain experience. Working with Bell and his Leading Edge Motorsports crew, Freese looks forward to the latter half of 2016 as he will be in the running for race wins and podium finishes.

Kelly has had his up’s and down’s in the 2016 season to date as he has shown the speed to run at the front of any S2 field he enters, but results have not been on his side. Though he has finished respectably in PKC competition, his times and speed should put him on the top step of the podium week in and week out.

Looking to make a change in his program, Kelly switched to the 2016 Praga dragon EVO for the first round of the SKUSA Pro Tour. Showing speed right out of the gate on Friday, Saturday would turn disastrous for the young gun. After receiving a disqualification in Saturday’s qualifying session due to track entry without permission from the grid steward, Kelly fought all day and salvaged a solid ninth place finish in a talented field of gearbox competitors.

Sunday would see his luck change for the better as Kelly qualified in the sixth position outside row three. Fine tuning his equipment with Leading Edge Motorsports throughout the heats where he finished third and second, Kelly took control of the main event from the drop off the green flag and never looking back on his way to a 1.1 second victory.

Making the switch from Rotax Mini Max to IAME X30 Junior, Leading Edge Motorsports has taken Grant Langon under their wing as they look to develop and nurture another national champion. Showing speed in his Mini Max days, Langon continues to get up to speed on the full size chassis and increase in horsepower but as a team, has taken huge strides in a steep learning curve. Langon will be back behind the wheel in Sonoma for the next round of thePro Kart Challenge where he and Bell look to continue to improve and find the necessary speed and consistency to be a SKUSA race winner.

Leading Edge Motorsports is looking for determined drivers to fill space in their championship winning program. Arrive and drive opportunities are available in all classes including X30 Senior, X30 Junior and Mini Swift in both the national and regional levels of SKUSA competition. With a race winning program and success for years, Leading Edge Motorsports will continue to give their customers the highest attention possible with no more than eight drivers under the team tent.

Bell continued, “We are super focused on our team and providing them with what they need to achieve success.”

For more information on Leading Edge Motorsports and opportunities to join the California based team, please contact Greg Bell at LeadingEdgeGuy@sbcglobal.net or visit them online at www.LeadingEdgeMotorsports.com.