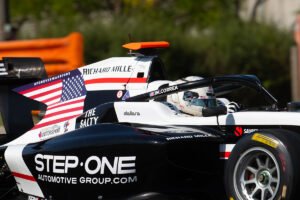 Art GP competitor, Sauber Junior Team driver, and Step One Automotive Group backed Juan Manuel Correa was back on track this past weekend in Budapest, Hungary for the fourth event weekend in the FIA F3 Championship. Taking on the famed Hungaroring alongside the Formula One World Championship, the American driver continued to ramp up his progress in his racing return in a consistent race weekend.

“The Budapest weekend was tough, but it was positive in many ways. Obviously results wise was not what we wanted. No points, and no podium which is what I was hoping for but in terms of progress, it has probably been the best weekend of the season so far,” explained Correa. “I managed to use the normal brake pedal and pump for the entire race weekend which gave me a much better feeling for the car, gave me more consistency during the race runs and it is slowly making me feel more and more confident inside the cockpit.”

Claiming the 16th fastest lap time in the one and only practice session, Correa was able to advance forward two places on the results sheet to 14th by the end of qualifying. In a grid that featured thirty cars, qualifying results with Correa .80 from the pole position and the front nineteen cars separated by one second compared to the top-six in in Formula One separated by the same time gap. Running a solid race pace and using unaltered equipment to aid in his comfort level, Correa was able to secure a trio of 14th place finishes in rounds ten, eleven and twelve of the 2021 season. Despite challenging wet weather conditions in the third wheel-to-wheel action of the weekend, Correa managed to learn, gain experience and build confidence for future events.

Correa added, “The races this weekend have been the best ones in regards to pace and control of the season and I am very pleased with that. Now, it is just a matter of trying to fix the qualifying to make sure I am more in the front because I am confident now that if we start up there, we will stay there.”

Gaining nine championship points this season, Juan Manuel Correa will now shift his focus to the next event as the FIA F3 Championship will continue over the August 26-28 weekend in Belgium at Spa-Francorchamps.

JM Correa would like to thank all his marketing partners for their continued support including Step One Automotive Group, NOE Sushi Bar, Bell Helmets, The Salty, Revolution 93.5, and OperationMotorsport.org.