In his first ever trip to Azerbaijan and the Baku City Circuit, American driver Juan Manuel Correa scored a pair of points scoring finishes on route to a second place podium result during Sunday’s wheel-to-wheel competition. After driving from 17th on the grid to a seventh place result during race one on Saturday, Correa turned his front row starting position for race two into a podium result, claiming points in both races on the weekend and claiming the highest finish by a rookie in both events.

After claiming the ninth quickest lap in the one and only practice session for the FIA Formula 2 drivers, the Sauber Junior Team by Charouz competitor qualified in the 17th position and started race one from inside row nine.

“We had a technical issue with the car and it did not allow me to go any faster,” explained Correa. “It is disappointing as the pace in the car is there. I think we can still challenge for points, but we need to see what is presented to us in both races and try and take advantage of what we can, where we can.”

In Saturday’s race the Formula 2 field would see the presence of the safety car on multiple occasions. Correa, taking full advantage of each and every opportunity, avoided the first lap melee and gained several positions on restarts to rocket his way into the top ten. Keeping his Sauber Junior Team F2 car out of trouble, the American crossed the stripe in the eighth position, but was classified seventh after a post race penalty to a fellow competitor advance Correa forward one extra position.

“I don’t know what to say. From one side, I am very happy. First points and we are starting second tomorrow and P8 was our goal after qualifying; but on the other side, it was such a messy race that you always have the taste in your mouth that you can probably do better because so many different scenarios happened. Feel bad for the team as well as the team missed out on scoring points with both cars due to a mechanical failure on Callum’s (Illot) car,” explained Correa. “I am happy. We have the points and we finished the race with no incidents, which was the main priority for me. I got all the experience and everything went quite smoothly. Tomorrow we start on on the front row and that is the best thing that we could have hoped for.”

Learning from his first street circuit event Saturday, the Sauber Junior Team by Charouz driver translated his front row starting spot on Sunday into an impressive podium position. Along with the second place finish, Correa was once again the highest placing Rookie driver for the second day in a row as he led the Sauber Junior Team by Charouz team results over the weekend.

Taking the green and maintaining his position, Correa lost touch with the leader, and eventual race winner due to a mistake on his part.

“I had an issue with the brakes and did not feel very comfortable in the car at all,” explained Correa. “I think that I overheated them early and could not push the car to its full potential. I was able to get into a rhythm, but I was relieved when the safety car came out so we could regroup and have a fresh start.” 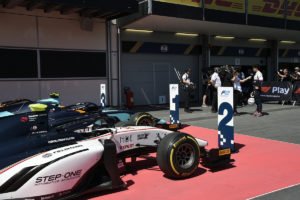 The American battled hard with several fellow F2 competitors and held off their advances while attempting to take the lead after the safety car midway through the race.

“I had to send it down the inside as if did not do so, I feared that I would be hit from behind,” explained Correa. “I was in the situation of pass or be passed so I just went for it. At the end of the day it was an unbelievable race. We did not have the outright pace to maybe win, and I had to overcome a problem with the brakes, but once I was able to get past that, it was just a matter of trying to close the gap to the leader and take advantage of situations that presented themselves.”

Correa continued, “It was a good race for the team as both cars finished in the top ten and that is a true testament of how hard these guys have worked. This is great momentum towards our next event weekend in Spain in two weeks.”

The next event on the FIA Formula 2 calendar is May 10 – 12 at the Circuit de Barcelona in Catalunya, Spain. Juan Manuel Correa will enter the event sitting sixth overall in the FIA F2 Drivers Championship.