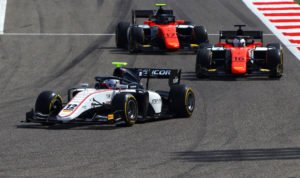 Competing in his first FIA F2 Championship event this past weekend at the Sakhir International Circuit in Bahrain, American driver Juan Manuel Correa had a less than ideal weekend. Competing with the Sauber Junior Team, Correa claimed 16th and 18th after contact took him out of contention of a top-ten result in race two.

The first of the two Bahrain races was difficult for the field of F2 drivers, who had all had the difficult task to manage their tires. Correa and his Sauber Junior Team chose the middle compound of Pirelli, as did most of the field, and in the only pit stop, they switched to the soft compound. Running as high as 12th on track, the young America would eventually finish his race P16.

“This first race is not what we wanted nor what I expected. It was a tough race,” explained Correa following race one. “The truth is I have not sat down to see data with the engineers and analyze exactly what happened. I feel that we used a lot of rubber at the beginning, and the balance of the car did not allow me to take care of the tires, which hurt my performance throughout the rest of the race. The positive side is that I finished the race, we have the mileage, which is very important, and we are going to use it as a practice to learn and try to improve for tomorrow’s race.”

On Sunday, Correa started the 23-lap sprint race in tremendous fashion moving forward in the running order and just outside the top-ten. Starting 16th and advancing forward to 11th before unfortunate contact with British driver Jordan King at lap seven forced him to the pits to change the nose of his car, dropping him to the 18th position at the end of the race.

“It was a big shame to have that little touch. I do not know what happened, but it took me by surprise,” added Correa. “In general, it has been a much more positive race than yesterday, so I am happy. The first stint was excellent; I overtook about five cars, and had a good pace. Without the touch, the top-ten could have been possible. Regardless, have we to keep our heads up high and keep working. I am sure that for the next race we will arrive with much more strength, as we have learned a lot this weekend.” 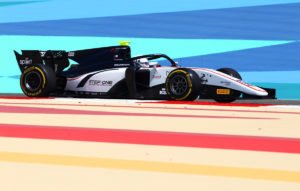 “The growth curve has been huge during the weekend, which is the most important thing at the beginning of the season. I’m super positive; I think the team is too, even the results don’t show it.”

The next test will be in Azerbaijan, on the urban circuit of Baku, from April 26-28.

JM Correa would like to thank all his marketing partners including Step One Automotive Group, NOE Sushi Bar, Bell Helmets, Revolution 93.5FM, and Decimal Capital.

Juan Manuel Correa
JM Correa (19) is an American-Ecuadorian F2 driver, that grew up in Miami, FL and currently lives in Barcelona, Spain. Juan Manuel ’s racing season will be completed with Sauber Junior Team and he has been selected to participate in the Alfa Romeo Racing Formula 1 Team as Development Driver.