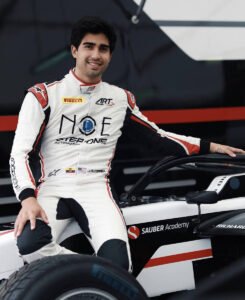 It was another point-scoring weekend for 21-year-old American Juan Manuel Correa. Competing with the Art GP program, Correa had reset his goals heading into the second event of the season at Circuit Paul Ricard in La Castellet, France, and achieved those goals both in qualifying and the first wheel-to-wheel race of the weekend. Opening the weekend with an announcement that Correa had rejoined the Sauber Young Driver Academy, serving as the Alfa Romeo’s Development Driver alongside his current racing duties, Correa rejoins the path that he was on in 2019.

After a less than perfect practice session, Juan Manuel Correa entered qualifying with high hopes, knowing the potential of his Step One Automotive Group backed FIA F3 machine. When the dust had finally settled, the young American scored the sixth fastest lap of the session and would start race one from the outside of row four.

“Very happy of course to be in the top-ten as that was the goal before this weekend, and it is nice to have made it there after qualifying,” explained Correa. “It will be good to be more towards the front when racing begins and get a bit more in the mix. Hopefully being a little bit further up the grid will help us gain some better data and learn a little more. The free practice this morning was not easy as I was struggling to put some laps together at the beginning and never managed to get a great lap. We were a bit worried heading into qualifying, but I felt that we had some great potential in the car, and it was just a matter of putting it together and that is what we did. We will see how race one goes tomorrow as I will be starting from the fourth position due to the reverse grid and it will be a physically hard race not just for me, but for everyone and I hope that we can stay in the mix with the top-five.”

Following the first wheel-to-wheel action of the weekend, Correa went on to add, “Overall pretty happy with race one and while we managed to hang around in the top-five or six even though I would have loved to fight for a podium, but we did not have the pace in the car. The confidence in the middle of the race to attack but it is all part of the process and my return. Five more points for the championship and the focus shifts to this afternoon where we will start seventh after the reverse and another opportunity to score points, learn and gain some more experience.”

Race two of the weekend would take place on Saturday afternoon and it was a difficult result for Correa. Suffering from fatigue due to physical fitness, the American crossed the line with a 17th place result but remained in good spirits towards Sunday and the third race of the triple-header weekend.

Aiming to claim more points in the third wheel-to-wheel action, Correa was able to once again finish in the top-ten, his second top-ten result of the weekend and third of the season in wet and tricky conditions. Achieving his goal of adding more points to his championship total after starting and finishing in the ninth position, the American driver was happy with his performance over the weekend despite needing to still work on a few areas of physical and mental fitness. 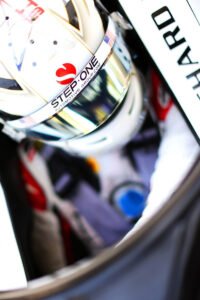 “Finished the weekend in P9 and two points towards the championship,” explained Correa, who lost three positions on the start but managed to gain them back by the end of the race. “It was a tricky race with wet conditions, very slippery and easy to mistake. Just finishing and staying in the position I started was a challenge but, in the end, it was a positive way to close the weekend. One thing to note, we were able to hold a lot of our starting positions compared to teammates which is a positive. We keep improving and pretty happy with the weekend but there are still steps that we can improve. From here on out I want to be in the top-ten in race results and that is the goal when we start back up in Austria.

The FIA F3 Championship will continue in less than two weeks, over the July 1-4 weekend in Spielberg, Austria.

JM Correa would like to thank all his marketing partners for their continued support including Step One Automotive Group, NOE Sushi Bar, Bell Helmets, The Salty and Revolution 93.5