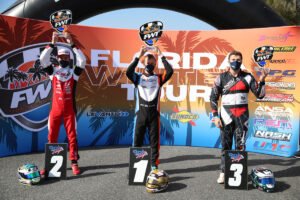 In similar fashion to the first round of the ROK Cup USA Florida Winter Tour, BirelART North America found their way to the top step of the podium in the Shifter Master ROK class courtesy of Jordon Musser. Taking on the Ocala Gran Prix (OGP) facility this past weekend, Musser was once again the victor as he extended his championship points lead while Jake French scored a podium result in Shifter ROK.

“The weekend started off great on Thursday and then rain moved into the area on Friday and dampened everyone’s spirits,” explained Dominic Labrecque. “We had overcome qualifying and the first heat race in the rain before sunny conditions were presented for the rest of the weekend. All in all, it was another terrific Florida Winter Tour event put on by the ROK Cup USA staff, and we can’t wait to chase championships at the final round next month.”

Leading the way on the results sheet was Shifter Master ROK driver Jordon Musser who had an uncharacteristic qualifying session that would see him start all three of his heats on the outside of row two. Lining up second to start the prefinal and driving to the win, Musser continued his winning ways on Sunday leading flag-to-flag and dominating the main event to extend his championship points lead.

In the Shifter ROK division, it was Jake French that put the BirelART North America program on the podium. After being the quickest driver in Thursday’s practice before the rain arrived and after qualifying in the tenth position in the wet, French moved forward and eventually earned a fifth-place result in Saturday afternoon’s prefinal. Rocketing off the line in the main event and moving to P3 by the end of lap one, French was able to make a move to second during the middle portion of the race to stand on the podium. Fellow Shifter ROK driver and BirelART teammate Michael Stevens earned a top-ten result in Sunday’s main event after qualifying eighth in wet conditions on Friday. 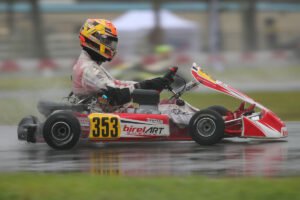 Four more top-ten results came from Junior ROK and Senior ROK competitors as Jack Jeffers and Caleb Gafrarar secured eighth and ninth place finishes at the conclusion of the event weekend with Jeffers starting in the 26th position and gaining eighteen spots to earn his top-ten finish. In Senior ROK, Thomas Nepveu was able to garner a second-place result in Friday’s qualifying and gained four positions from his main event starting position to finish sixth. Filip Niemkiewicz ran inside the top-ten throughout the event weekend claiming a tenth-place finish on Sunday while Mauricio Hernandez had a strong showing earning a top-ten finish in Saturday afternoon’s prefinal.

For more information to become part of the BirelART, Ricciardo, or Charles Leclerc dealer networks or information on how to join the PSL Karting / BirelART North America Race Team for the 2021 season, please contact Dominic@PSLKarting.com.