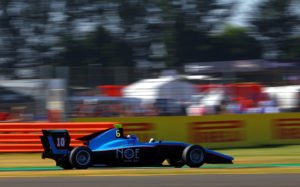 Competing in the fourth event weekend of the GP3 Series, American driver JM Correa was looking to return to his pace from the very first event of the season. Taking on the Silverstone circuit in Great Britain for the third consecutive weekend of wheel-to-wheel action, Correa and his Jenzer Motorsport program ran alongside the Formula One World Championship as they looked to improve on results.

Kicking off the weekend with a 15th place effort in qualifying, Correa and the entire Jenzer Motorsport squad searched for lacking speed throughout the weekend.

“Silverstone was once again not what we were looking for as a team,” explained Correa. “All three Jenzer cars struggled massively with pace during qualifying and that compromised our entire weekend. Obviously when you have to start race one from the last quarter of the grid it is necessary to take a more aggressive approach, and this time that didn’t work out for us.”

Looking to take advantage of cars running close at the start of race one, Correa would be involved in a first corner incident and was forced to retire from the race, failing to complete a lap, the American started race two from the tail of the field, and though he advanced forward, it wasn’t enough to get into a points scoring position.

Correa continued, “As a team, we will regroup this week and prepare for the Hungaroring.”

The next GP3 Series event will take place this in two week’s time on July 27-29 at the Hungaroring in Hungary alongside the Formula One World Championship.

For additional information on the GP3 Series, please visit www.GP3Series.com