Looking to advance his way forward in the Italian F4 Championship point standings, American/Ecuadorian driver JM Correa traveled to the Autodromo Vallelunga Piero Taruffi for the fifth event weekend in the program. With three races on the docket, Correa put his name at the top on Sunday as he stood atop the podium for his third victory in the series this season.

“It was a very positive ending to an otherwise difficult weekend,” explained Correa following his race win. “It’s good for both the team and I to finish on a high, and we will hope to keep the momentum going for Imola in a couple of weeks.”

With the skies opening just before the start of the first wheel-to-wheel competition of the day, teams scrambled to prepare cars as series officials delayed the start of race one. With weather proving to be touch and go, Prema Powerteam drivers chose to leave slick racing tires on in the hopes the track would dry before the checkered flag would fall. With only a few drivers selecting the grooved slick tire option, the rain began to fall steadily after the start of the race and Correa as well as all the other drivers on the slick tires would try and survive and gain as many championship points as possible. With the lead duo on wet weather tires and gaining a huge advantage when the rain began to fall more steadily, Correa was forced to tip toe his way around the slick surface, ending race one in fifth and standing on the podium in third for the Rookie category. 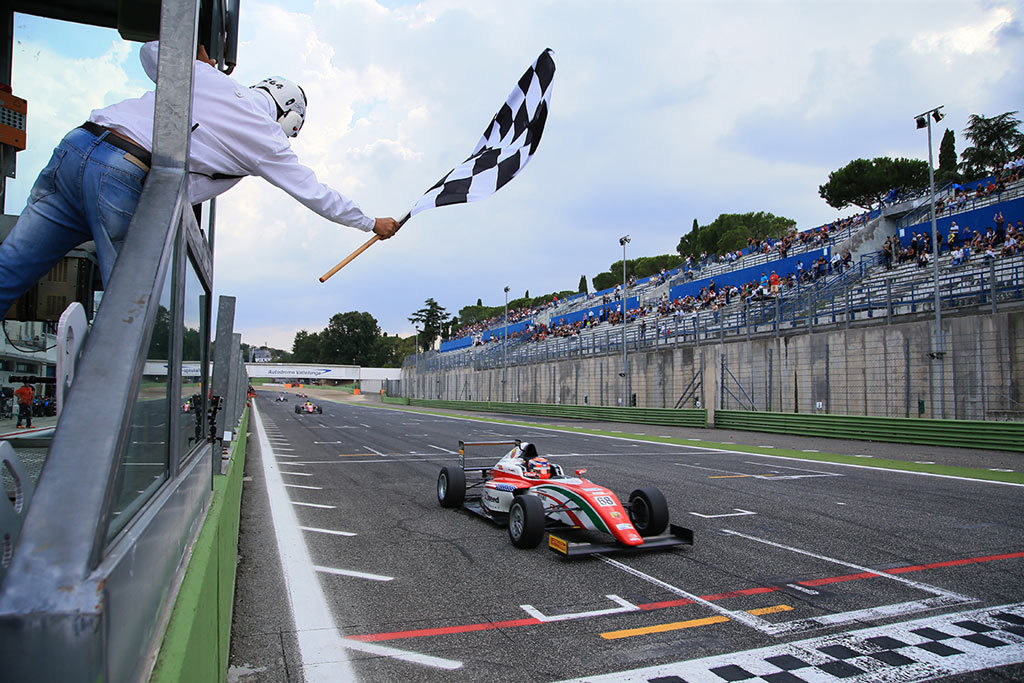 Sunday saw race two and three on the weekend as Correa hoped to continue his weekend point haul. Starting inside row five for race two, JM did not have the race he had hoped for as he advanced to the seventh position before contact lead to a damaged suspension and he would be forced to battle hard to maintain position in the top-ten. Utilizing his race craft and experience, the Italian F4 Rookie closed race two in tenth.

With an inverted top-ten from race two making up the grid for race three, Correa had the point and a clear drive off the line to corner one. Showing speed all weekend to run in the top-five, JM took advantage of the front starting position, as drama would ensue with a three-car collision behind him yielding some caution laps behind the safety car. Timing his restart to perfection and getting a jump on the field, Correa went on to lead every lap on the way to his third victory of the season.

JM Correa would like to thank all of his marketing partners and supporters for a successful 2016 season to date. A big thank you to Prema Powerteam and their team supporters as well as MAXSpeed Entertainment, Ritmo Mundo, Fikse Wheels and Theodore Racing.

In other news, RTD Media and Management has taken over the production of social media pages and a web page for JM Correa. Links to all pages can be found below.