JM Correa gears up for the first round of the ADAC Formula 4 Championship Series, taking place April 28-30 at the Motorsports Arena Oschersleben in Oschersleben, Germany. With the ADAC as his main focus in 2017, Correa is coming into the event prepared for the highly competitive series with a full line-up of talented drivers. Correa will focus on meeting his goals of race wins and podiums, as well as becoming more consistent throughout the seven-weekend championship in his run for the overall series title that concludes in late September. 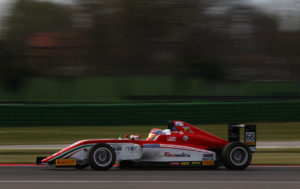 Correa enters the first round of the ADAC championship coming off his first event of the season, the Italian F4 Championship that took place in Misano, Italy. Despite the adversity encountered, he drove well all weekend, using the event as both a positive learning experience and a warm-up for the ADAC championship. Correa recently completed a test at the Motorsports Arena Oschersleben in preparation for the German F4 championship where he was the quickest driver on track at the end of the second test day. The young American pilot hopes to carry the positive momentum into the opening round of the ADAC series and put his Prema Team and supporters on the top step of the podium.

“We had a great test in Oschersleben last week and I am very confident heading into the first round of the ADAC Formula 4 program,” explains Correa. “Utilizing the first Italian F4 event as a test weekend in race conditions was a smart move for both the team and me, as we learned a lot and were able to bring that new knowledge and experience to the car here at Oschersleben.”