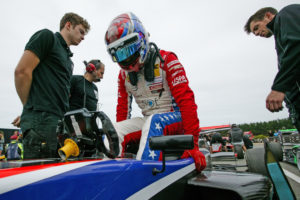 With some down time before any schedule racing series kick off in 2018, American driver JM Correa, along with his race engineer, would enter and compete at the Castrol Toyota Racing Series in New Zealand with M2 Competition. With the goal to gain valuable seat time and develop a high quality working relationship, the duo went on to score a pair of victories and one pole position as they competed through New Zealand for the past five weeks.

“When the opportunity came up to compete in the Toyota Racing New Zealand program, we jumped at it,” explained Correa. “The series is known for producing talent but I was more excited to race at different tracks that I had yet to see as well as continuing to develop the relationship with my race engineer.”

When the final checkered flag had flown this past weekend, JM Correa closed the series with a fourth place result in the championship, buoyed by one pole position and a pair of main event victories. Standing on the podium on four occasions, the former karting champion was happy with the progress made and is excited about the remainder of the 2018 season.

“We definitely learned a lot over the past month and a half,” added Correa. “Coming into a series with a different car than you are used to and at tracks that you have never seen, really forces you to get acclimatized with everything in the program quickly. We were up to speed early and improved throughout the season. Of course I would have liked to win more, but I am happy for the opportunity and hope to elevate that into the rest of my season.”

With his 2018 plans to be announced in the very near future, JM Correa will continue his off track strengthening and training program.

JM Correa would like to thank all his marketing partners in 2018 including US Performance Academy, Faico-Motriz, NOE Sushi Bar and Bell Helmets. A big thank you M2 Competition as well as the Castrol Toyota Racing New Zealand series for an elite program.