With his first career GP3 Series start now under his belt, American driver JM Correa will travel to the Autodromo Nazionale Monza in Monza, Italy this coming weekend. Joining Jenzer Motorsport and entering his second GP3 Series event in as many weeks, Correa looks to build upon the experience gained and begin to march his way up the running order.

“Spa was my first event with Jenzer Motorsport and my first event in the GP3 program so the learning curve was quite steep,” explained Correa who proudly sports the American colors of red, white and blue on his race suit. “I am a lot more aware of the happenings over a GP3 weekend now as well as what it takes to be competitive in the talented field of drivers. I am looking forward to Monza as it is a facility that I have had success at in the past.” 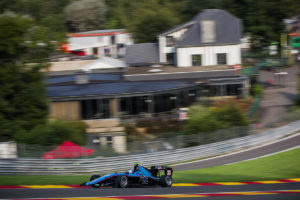 With the GP3 Series not permitting pre event testing, Correa’s only dry session before wheel-to-wheel competition was the Friday morning practice session where he would look to take advantage of the time permitted to learn the aspects of the Pirelli branded tires as well as the tire degradation that goes along with them.

After experiencing both dry and wet weather action in the practice and qualifying sessions in Spa, Correa was motivated to continue the learning process. Throughout the rest of the weekend, the young American thrown into the mix having to learn the Formula One standard DRS (Drag Reduction System) as well as the virtual safety car, both new to him in GP3 .

“The practice session went well in Spa as at the end of the run, I was in the top-ten while learning about both the DRS and the Pirelli Tires,” Correa continued. “Qualifying was quite a challenge as it rained before and throughout the session which made for tricky conditions. I was also able to experience my first two GP3 starts that will help me in my future progress.”

With the goal of seat time, learning, improving and gaining as much mileage as possible, he and his team are not focused on results, but preparing the American for a solid future in the world of motorsports. Race one went as planned for the American as the objective was to feel the car as well as continue the learning process of DRS and tire degradation in race conditions. With no mistakes or damage to the Jenzer Motorsport prepared car, it was a successful start to a new endeavor.

Race two would see a slight hiccup during the start as Correa would stall his ride due to lack of experience with the cars starting procedure. Falling more than six seconds behind the field, the GP3 rookie would continue to gain the experience needed as he caught back up to the tail of the field. Performing a few on track passes, Correa was forced to retire early due to an engine issue. 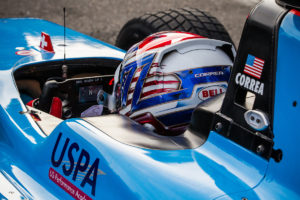 Correa added, “I will now shift my focus to Monza and look to continue the improvement. I will utilize the same plan as I did when entering my first event this past weekend and try to gain as much experience in race situations as possible. While I will love to focus on the results, my main areas of focus will continued improvement on all aspects and measure them against myself on a race by race basis.”

JM Correa would like to thank all his marketing partners in 2017 including Jenzer Motorsport, US Performance Academy, Faico-Motriz, NOE Sushi Bar and Bell Helmets.