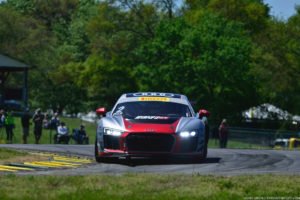 With his eye on the Virginia International Raceway event since the conclusion of the 2017 event weekend, Floridian driver Jason Bell looked forward to his chance to compete at the rolling hills facility. Making the switch to the Audi R8 GT4 LMS vehicle and Audi Sport customer racing program, M1 GT Racing, Bell has shown speed throughout the first three events of the season, and looked forward to a promising and successful weekend of racing.

Jason’s luck would not change on Saturday either. After having a successful test day that would see him pace in the top-ten in his Pirelli World Challenge GTSA division, the first official race day of the weekend saw Bell qualify tenth in class (24th overall).

“I was happy with my qualifying effort but believe that I left a little on the table,” explained Bell. “The race will be intense this afternoon as there is a large field here at VIR and this track does not allow for any mistakes.”

With an impressive start that saw the M1 GT Racing driver advance forward eight positions on the opening circuit, Bell would solidify his position in the top-five in his class, running as high as fourth at one point. Maintaining his pace until the mandatory pit stop, the plan to attack in the latter half of the hour long event was on par with the pre-race strategy before disaster struck.

Bell added, “We completed our pit stop where we checked tire pressures and made sure that everything was in working order and returned to the track. Our pace was really positive and we were looking for at least a top-five, if not a podium result, before a flat tire pulled off the rim and forced me to retire. It was better that I stop the car on the back side of the circuit rather than risking more damage on the long lap back to the pits.”

With a retirement on Saturday, Bell was back for redemption on Sunday and immediately improved upon his starting position. Moving forward and running sixth in class, Bell would once again look poised for a top-five result before a pit lane time penalty would force him to take a drive thru penalty, relegating him down the order.

Finish 23rd overall in and ninth in class, Bell was disappointed with the call and eventual drive thru penalty.

“I am not sure if we did anything wrong and if we did, the punishment for the crime did not fit the bill,” indicated Bell. “I feel as if I was robbed of a pair of top-five results this weekend. Yesterday a flat tire forced us out and today, the pit lane time put us way deeper in the field than we should have been. The results this weekend definitely give me motivation for the next event in Canada.”

Jason Bell and M1 GT Racing will travel to Bowmanville, Ontario, Canada, just outside of Toronto for their next on track action. Taking place at the Canadian Tire Motorsports Park facility, the challenging layout and historic grounds will host the next rounds of the Pirelli World Challenge program.

Jason Bell would like to thank his partners for their continued support. A special thanks to Continental Benefits, Osteria, Frost NYC, Gridsport, Reeves Motorsports, Audi of Tampa and M1 GT Racing.