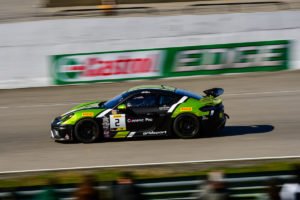 ing to the Canadian Tire Motorsports Park near Bowmanville, Ontario, Canada, Jason Bell secured a solid fourth place result in the first wheel-to-wheel action of the weekend. Competing with the GMG Racing program in the Pirelli GT4 America program, Bell piloted his Porsche Cayman to top-five results throughout the weekend before an incident on Sunday late in the race took him out of contention.

“It was a good weekend in Canada,” explained Bell. “We were pretty quick right out of the gate in Thursday afternoon’s practice session and it carried through the weekend. Sunday was a difficult day, but we will rebound and come back stronger at the next one.”

Claiming fourth in class, and fifth overall in Thursday’s practice session, Bell carried his momentum into Friday’s sessions with another impressive fourth place effort. Qualifying would see the GMG Racing driver fall back to fifth in class and eleventh overall, but in race one on Saturday morning, Bell drove his Porsche to a fourth place effort, narrowly missing out on the final step of the podium.

Bell continued, “The GMG guys gave me a great car this weekend. With each passing event, we are learning more and more about this Porsche and becoming more consistent. The speed is there, and we will be on the podium and winning races in the very near future.”

Sunday was an eventful day for Bell, as his race would not roll off the grid until late in the day. Waiting for other on track sessions to finish, the Pirelli GT4 Sprint competitors finally took to the track late in the day. With the goal to improve on his fourth place result the day prior, Bell was involved in a late race incident that took him out of contention and left him on the sidelines for the final few circuits.

“It is disappointing not to be able to complete the full race distance,” added Bell. “Our car was not as good today as it was yesterday, and I was racing in a position that I should not have been in. Unfortunately, the contact was severe enough to retire the car from the race, and we will now have to shift our focus to the next event.”

The next event for Jason Bell will take place June 7-9 at the famed Sonoma Raceway in the heart of wine country in Napa Valley, California.