JASON BELL DOUBLES UP IN GT AMERICA PROGRAM THIS WEEKEND 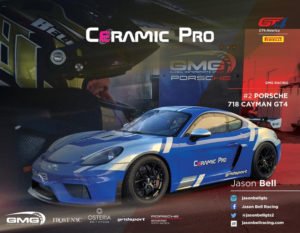 Never one to do things in the norm, Floridian Jason Bell is taking that to a new extreme this weekend. Competing in the SRO America GT4 America event at the 2.52-mile Sonoma Raceway, Bell will compete in both the GT4 America Sprint and SprintX divisions behind the wheel of two of the most iconic know marquees of the world.

“It is not going to be easy, but I am up for any challenge,” explained Jason Bell. “Switching between two brands and two completely different cars will force me to adapt quickly to keep pace with the frontrunners. I think if we can nail the setup on both, we will be able to challenge for podiums in both divisions over the weekend.”

Bell continued, “I have had great success at Sonoma Raceway in the past and partnering with James increases our chances for success. Coming off a strong fourth place run at the Canadian Tire Motorsports Park near Toronto, Canada, we will be aiming for the top step of the podium and look to carry that momentum throughout the remainder of the 2019 season.”

With practice commencing this coming Friday, qualifying and the first wheel-to-wheel action of the weekend will take the green flag on Saturday. Sunday will be the home of race two on the weekend. Competing in two separate classes, Jason Bell will have plenty of track time including two qualifying sessions and four races throughout the three-day weekend.