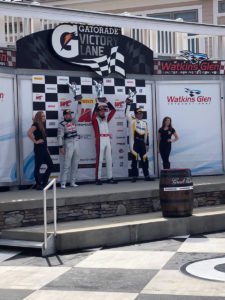 “What a weekend for myself and the entire GMG Racing Team,” explained Bell. “We unloaded and were pretty quick right off the trailer so we fine tuned from there. It was nice to have our team cars up front and to end the season strong. Our results in the last half of the year are a true testament of the hard work and teamwork from everyone at GMG.”

Competing in the Pirelli World Challenge GTS division, Bell had two great practice sessions that saw him fifth and fourth respectively in class. Looking to continue that trend in qualifying, a missed setup and track position cost Bell a top-five starting position as he was mired back in 17th overall and ninth in class.

Bell continued, “Qualifying was not what we had hoped and it really put us behind for race one. Luckily we were able to move forward and progress throughout both races and score a good result.”

In race one, Bell was able to advance forward three positions overall and two in class to come home in the seventh position. More importantly, lap times during Saturday’s events set the grid for Sunday and the Global Motorsports Group driver lined up fourth in class. With a podium result the goal, Bell achieved what he had set out to do claiming the checkers in P3 and stood on the final step of the podium.

“Great to finish the season strong. We can now focus on some other events that we had planned as well as look forward to the 2019 season.”