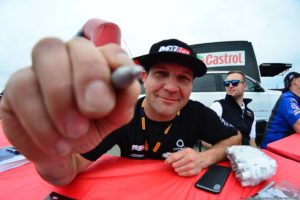 Competing in his first event behind the wheel of an Audi R8 LMS GT4, Jason Bell would compete in his home event on the 2018 calendar at the Grand Prix of St. Petersburg. With wheel-to-wheel competition taking place within the tight confines of the barrier-lined temporary street course, Bell put M1 GT Racing on the podium in the first Pirelli World Challenge race of the season while scoring a top-ten finish in Sunday’s second event of the weekend.

“It was a great weekend and an awesome first race,” explained Bell. “I was able to get clear of some traffic during race one and take advantage of some on track situations to move forward. Sunday was a little more difficult as I was forced to start in the 17th position based on Saturday’s lap times and never could get in the right rhythm to move forward.”

In a caution filled race one, Bell showed the true strength of his M1 GT Racing prepared Audi R8. Working with his coach to overcome some minor driving issues from Friday’s practice and qualifying sessions, the Tampa Bay resident drove forward to secure his first podium result of the season.

Bell continued, “Race two was a little more difficult. We had decent pace but I was stuck in traffic for the majority of the race. The weather changed right before the race and we got caught out a little bit, but I was extremely happy with the program and that the car came back in one piece. A big thank you to Audi Sport personnel for the constant support throughout the weekend.”

Jason Bell will enjoy only one weekend off before traveling to Austin, Texas for rounds three and four in the Pirelli World Challenge Championship. Taking place at the famed Circuit of the Americas, Bell returns to the facility that he scored a podium result at in 2017 and will aim for the top step of the podium.

Jason Bell would like to thank his marketing partners for their support throughout the 2018 season. A big thank you to Gridsport, Audi Tampa, Motorsports by Reeves, Continental Benefits, Frost NYC, Osteria, Franklin Manor and M1 GT Racing.