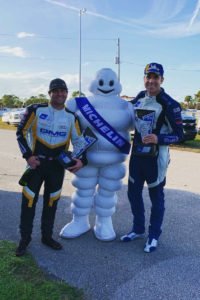 Looking for redemption on their most recent endurance event, Jason Bell and his GMG Racing co-drivers of James Sofronas and Andy Lally stood on the podium this weekend, at the conclusion of the Michelin IMSA SportsCar Encore. Taking place at the Sebring International Raceway in South Central, Florida, the California based team was able to secure the second position and close their season on a high note as they look forward to 2019.

With four practice sessions leading into qualifying, the #22 Audi R8 GT4 LMS remained consistent and near the top of the time charts. Working to fine tune their endurance race setup to ensure reliability, outright speed was not the concern of Jason Bell’s.

“A lot can happen in an endurance race and we experienced that a few weeks ago when we had a shot at the win,” explained Jason Bell. “We had good pace, we just needed to execute and did so on our way to a podium finish.”

After qualifying in the third position, the GMG Racing trio of Sofronas, Lally, and Bell went into race mode and the do’s and don’ts of endurance racing. Hovering in the top-three throughout the race and taking the lead on a few occasions through pit stop cycles, the Audi drivers solidified a podium result, with no on track or pit road errors throughout the four-hour event.

After losing touch with the leader slightly, a full course yellow breathed a breath of fresh air in the lungs of the trio as they were able to close the gap on the leader in the last hour of the race. Unfortunately, traffic and pace played a role in the finishing results but Bell scored another podium to cap off his 2018 season.

Bell continued, “It was an up and down season but I am happy to close it out on the podium. I can’t wait to announce next year’s race plans and get started on a winter testing program.”

Jason Bell would like to thank his partners for their continued support. A special thanks to Highway Systems, Incorporated, Continental Benefits, Osteria, Frost NYC, Gridsport, Reeves Motorsports, Audi of Tampa and Global Motorsports Group.