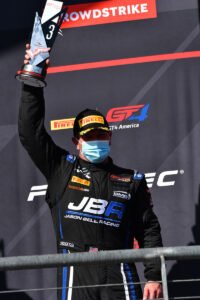 Testing a few weeks ago at the famed Circuit of the Americas led Jason Bell to a pair of podium results this past weekend. Still relatively new to his GMG Racing prepared Aston Martin, Bell drove to two podium results in the GT4 America program. Also seeing action in the Pirelli GT4 America SprintX alongside co-driver Andrew Davis, the duo would finish sixth on Sunday before contact ruined their day on Sunday.

After progressing through Friday’s test sessions, Jason Bell qualified his #2 GMG Racing Aston Martin entry in the fourth position for the GT America GT4 event that would take place later that afternoon. With one podium already on his resume from the 2021 season, Bell would push for another and earn it by the time the checkered flag flew in his first wheel-to-wheel action of the weekend. Showing great pace and advancing forward two positions as the rain blanketed the Circuit of the Americas, Bell scored the second step on the podium.

Returning to the track Sunday and looking to build on Saturday’s strong finish, Jason Bell was able to find his way back to the podium and move to the second position in the GT America GT4 point standings. After proving to have the car to beat and passing for the lead in the late stages of the race, a mental error forced a mistake and allowed two competitors to get by. Salvaging a podium result, Bell feels that a win may have slipped through the cracks.

“Great weekend for me in the GT4 class with a pair of podium results,” explained Bell. “A mistake on my part after taking the lead relegated me back to the third position but being so close to the top step of the podium only makes me hungrier for next time, and we will look to accomplish that during our next event. A huge thank you to Aston Martin and GMG Racing for all of their help and support.”

Competing in the Pirelli GT4 America SprintX program alongside co-driver Andrew Davis, the GMG Racing duo qualified on the outside of row five, tenth overall for Saturday’s wheel-to-wheel action. Racing in the Pro/Am division, the duo worked their way forward to finish sixth overall and in class as they shifted their focus to Sunday. Unfortunately, the second race of the weekend would not go well for the GMG Racing and Aston Martin Racing duo as an incident on the opening lap forced them to the garage. Taking evasive action to avoid a spinning car in front of him, Davis was hit on the left corner damaging the wheel vent and tie rod. Working in the garage to get the Aston Martin repaired, Bell returned to the track late in the race to complete three laps and gained four positions to finish 17th.

“In the second SprintX race Andrew really had nowhere to go,” explained Bell. “He tried to get out of the way, but contact put us behind the eight ball. Unfortunate to end that way as we have been hitting our stride as of late and feel confident that we were able to challenge for a top-five finish, or even a podium result.”

Next stop for Jason Bell will be over the June 4-6 weekend at the Virginia International Raceway.

Jason Bell would like to thank all of his partners for their continued support. A huge thanks to GMG Racing, Aston Martin Racing, Ceramic Pro USA and Gridsport.