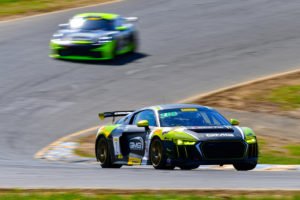 Traveling across the country from his home in sunny Tampa, Florida to the rolling hills of Sonoma, California, Jason Bell was able to add a Pirelli GT4 America SprintX victory to his resume. Competing in both the SprintX and Sprint divisions and behind the wheel of both an Audi R8 LMS GT4 and a Porsche 718 Cayman CS MR, Bell secured four top-ten results en route to a double podium, one victory weekend.

“It was a great weekend at Sonoma Raceway,” explained GMG Racing driver Jason Bell. “To come away with a SprintX win alongside my co-driver James Sofronas was one of the goals this weekend, and we accomplished that in race one. We were also able to stand on the podium in race two, providing GMG with a double podium performance. What a weekend!”

After putting their Audi R8 LMS on the off pole position for SprintX action, Bell and Sofronas successfully completed the first wheel-to-wheel action of the weekend victorious. Taking the class win and the fourth position overall, the GMG Racing duo has combined for several wins in the two driver format dating back to late in 2018.

Sunday’s race two did not see the Bell and Sofronas duo on top, but the pair did manage to secure their second podium finish of the weekend. Crossing the stripe in P2, the GMG Racing drivers celebrated on the podium for a second time this weekend.

Piloting his Porsche entry in the Pirelli GT4 America Sprint class, Bell qualified 11th in class and 20th overall, but quickly turned those results around in race action. Gaining five positions in Saturday’s race one, the Florida resident went on to secure a sixth place result in class, and continued that success on Sunday matching his Saturday finish.

Bell continued, “Each weekend we are getting better with the Porsche. Definitely found a lot of time this weekend and closed the gap to the leaders. The GMG Racing squad has put together a great machine, and I am gaining more knowledge and experience about the Porsche with each passing lap. I am confident that we will be fighting for podium finishes in the very near future.”