JASON BELL ADDS ANOTHER PAIR OF TOP-TEN RESULTS AT COTA 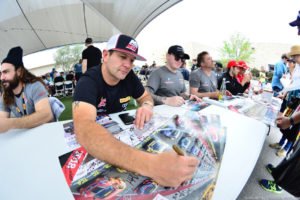 It was a full field of GTSA drivers at the second event weekend of the Pirelli World Challenge program at the famed Circuit of the Americas. Piloting his Audi R8 GT4 LMS in the SprintX GTSA division, Jason Bell was able to secure another pair of top-ten results to add to his 2018 season points total. Overcoming an on track incident and some bad racing luck, the M1 GT Racing driver and his team worked tirelessly to perform at their best throughout the weekend and represent their brand and marketing partners in a professional environment.

Bell showed great speed in the promoter’s test day on Thursday and the official practice session on Friday. After making some minor changes with the Audi R8 GT LMS, Bell and M1 GT Racing were ready to hit the track for qualifying. With a valiant effort behind the wheel, Bell qualified his Audi R8 LMS GT4 tenth in class and 19th overall for Saturday afternoon’s round of racing.

In the first wheel-to-wheel action of the weekend, Bell was running third in class and 13th overall. After an incident on lap one and a full course yellow, the M1 GT Racing driver endured contact from the rear on the second lap of the restart, but was able to continue driving with some damage to salvage a sixth place finish in class.

“The car felt great at the beginning of the race, I was comfortable and we were running third in the GTSA division,” explained Bell. “After being hit from behind, we had some damage to the car but were able to finish the race. I slowed down a bit from the incident as the damage impacted the handling of the racecar but was able to bring home a sixth place result. I am looking forward to race two of the weekend.”

After a late night preparing for Sunday’s on track competition, the M1 GT Racing crew worked into the wee hours of the morning to ensure they were able to put the best car on track. Repairing damage and with some setup changes, Sunday morning would bring a damp race track and a difficult decision before heading to the pre-grid.

“There was some rain overnight and we were forced to decide between wet and dry weather tires,” added Bell. “The track was drying but it was still really wet in some areas so we opted for the grooved wet weather tires. In the end, it was not the right decision but I hung on to another top-ten finish.”

Jason Bell is very appreciative of the support that he continues to receive. A special thanks to Continental Benefits, Osteria, Frost NYC, Gridsport, Reeves Motorsports, Audi of Tampa and M1 GT Racing.