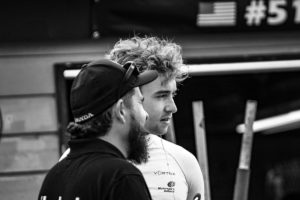 With the COVID-19 delayed race season now underway, it was time for James Roe Jr. and his Global Racing Group (GRG) outfit to head to the Mid-Ohio Sports Car Course for the opening event of the 2020 season. As a race winner from 2019 and competing with the reigning championship winning team, Roe has his sights set on the top step of the podium and the series title at the conclusion of the season, despite the huge increase in competition from year-to-year.

Progressing through the two practice sessions leading into qualifying, James Roe Jr. scored the fourth quickest time of the timed session and line up for race one on the outside of row two. With the race two grid set by the fastest lap in race one, a strong finish and a fast lap would be the goal.

A great launch off the line saw the Irish driver move into P3 before the entry of the first corner but relegated back to fourth as drivers were aggressive in the opening complex of corners. Battling wheel-to-wheel with race winners and champions from Sweden, Uruguay and the United States, Roe carried the Irish flag with pride in the top-five.

“I made a few errors throughout the race weekend, but we have to give it 110% every lap. The level of competition from 2019 to 2020 has greatly increased and the competition is very deep,” explained the Global Racing Group driver. “I ran wide on the exit in turn one and got a wheel onto the grass which let two drivers by and that was essentially the race. I was able to battle back to P5 but with the short race distance, that is all that we could muster. Happy to be at the right end of the grid but frustrated with the mistake that ultimately cost me a chance at a podium finish. However, I’ll learn and move on.”

Looking to anticipate the start for race two and aiming to move forward during the opening lap, Roe advanced out of his starting position before the lights went green and was assessed a post-race penalty of ten seconds by the Race Steward. Using the race to gain experience and try and move forward as much as possible, the GRG driver experienced brake issues during the only yellow flag of race two, but was forced to soldier on to see what he could salvage. 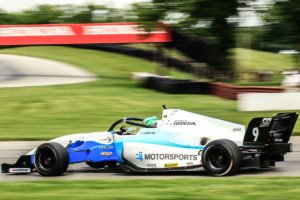 “I tried pumping the brakes on each straight to make sure I would be able to stop when I got to the next corner,” added Roe. “It is a scary feeling, but we overcame the issue and finished the race. At the end, I am not really sure of my finishing position with the penalty, but I am excited to see what the rest of the season holds. My team and I were in the position to battle with some of the top open wheel junior drivers in the world, and we were able to hold our own. Taking what I can from the weekend, I believe that we are in a position to challenge for race wins and podiums throughout 2020.”

With only a few weeks off, Roe will return to the racetrack July 17-19 at the Virginia International Raceway. With the FR Americas Championship Powered by Honda new livestream, fans and partners from around the world have to the chance to watch James Roe Jr. live in Virginia. During the event weekend, be sure to tune into www.FanRacing.Live.

The Vortex Companies deliver advanced trenchless products and services to cost effectively rehabilitate the nation’s aging water, sewer and industrial infrastructure. Strategically located throughout the US, Vortex delivers environmentally friendly inspection, assessment, and trenchless contracting solutions — along with a complete line of advanced repair materials and equipment — to permanently repair pipes, manholes and other structures without the need for digging. The company was built with the vision of providing a wide range of solutions, under a single roof, supported by highly experienced and trained personnel. Learn more at www.vortexcompanies.com.

Motorsport Ireland – Motorsport Ireland (MI) is the National Governing Body for four-wheeled motorsport in Ireland. MI is affiliated to the supreme authority for world motorsport, which is the “Federation Internationale de l’Automobile” (FIA) based in Geneva and Paris. The FIA recognizes in each of its affiliated countries, one sole authority that holds the sporting power and in Ireland it recognizes MI as that authority.

Motorsport Ireland’s jurisdiction covers the 26 counties and has under its umbrella 34 affiliated motor clubs that are the actual organisers of all sporting events. In each year there are approximately 230 events listed in the official calendar and these cover 11 different branches of the sport. Every person wishing to compete in one of these motorsport events must be the holder of a Competition Licence issued by MI or by another national governing body affiliated to the FIA. On average, each year MI issues over 4,000 Competition Licences to Motorsport.