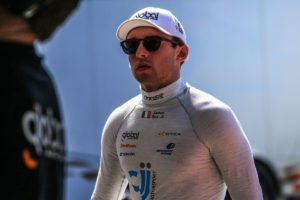 After a successful first weekend to kick off the 2020 FR Americas Championship Powered by Honda, James Roe Jr. returned to the track in Virginia. With the goal to improve and stand atop the podium, heat and humidity would be the talk of the weekend as the talented field of competitors continued to set the bar as the leading junior open wheel series in the country.

Taking part in a Promoters Test Day on Thursday, Roe showed tremendous speed. Turning the quickest times in the first two sessions of the day and backing that up with second place speed in session three, the Irish driver also proved his prowess in wet conditions running second in the time charts. Friday would provide Roe and his Global Racing Group program with two practice sessions, both which he paced in the top-five in speed.

With heat and humidity rising over the weekend, the on-track action would also heat up beginning with Saturday morning’s one and only qualifying session. With the change in weather, the track conditions followed suit as Roe’s Liger JS F3 car did not have as much grip as he anticipated from the day prior. Forced to alter driving lines and adapt in the short session that was reduced substantially in length due to an on-track incident, James qualified in the sixth position and would start race one from the outside of row three.

Launching off the line and gaining one position on the opening lap of race one, Roe immediately went to work on the fourth-place driver looking for a way by. With a restart due to another on-track incident, the Global Racing Group driver had a run as he made a bid for the position in the heavy braking zone.

“I made a mistake and broke behind the competitor in front of me,” explained Roe. “I had no air over the front wing and therefore had no downforce or grip. My front wheels immediately locked, and I went straight off the track and was forced to retire due to an overheating ECU that would not allow the car to re-fire as I went to rejoin the race.”

With lap times from race one setting the grid for race two, Roe would start back in the eighth position. With the competitiveness of the program in 2020, a scant .19 of a second quicker would have moved him up the grid five positions as five cars were covered by less than two tenths. Moving up to the seventh position on the start, the driver in front of Roe was spewing fluid from his car which forced James to maintain position as he was unable to mount a charge. Covered in oil, Roe crossed the line in the seventh position.

Race three on the weekend saw Roe finish in the ninth position as he battled in a train of cars that stretched up to P4. With drivers so close in times and a track that provided difficulty in overtaking and an overall hectic affair, James settled for a less than ideal starting position but gained a handful of points towards his championship total. 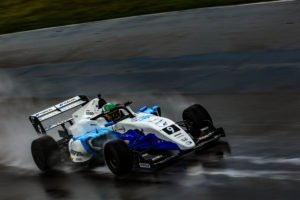 “Certainly not the easiest of weekends,” explained Roe. “It started off so strong with proper speed then slowly fell away. As of right of right now, we can’t pinpoint any one thing in particular except a number of small unfortunate circumstances. Those circumstances compounded throughout the long weekend with three races where your fastest lap in each is your starting position for the next. The field is so strong that the smallest of margins make or break you. We will do our homework, take everything on the chin, work hard and prepare for the next one in two weeks’ time.”

Roe continued, “I can’t thank the team and all our sponsors and partners for the relentless work and support. It’s only a matter of time before the jigsaw puzzle comes together given the speed we showed early in the weekend.”

With only two weeks off, Roe will return to the racetrack July 31 to August 2 at the Barber Motorsports Park. With the FR Americas Championship Powered by Honda new livestream, fans and partners from around the world have to the chance to watch James Roe Jr. live in Alabama. During the event weekend, be sure to tune into www.FanRacing.Live.

The Vortex Companies deliver advanced trenchless products and services to cost effectively rehabilitate the nation’s aging water, sewer and industrial infrastructure. Strategically located throughout the US, Vortex delivers environmentally friendly inspection, assessment, and trenchless contracting solutions — along with a complete line of advanced repair materials and equipment — to permanently repair pipes, manholes and other structures without the need for digging. The company was built with the vision of providing a wide range of solutions, under a single roof, supported by highly experienced and trained personnel. Learn more at www.vortexcompanies.com.

Motorsport Ireland – Motorsport Ireland (MI) is the National Governing Body for four-wheeled motorsport in Ireland. MI is affiliated to the supreme authority for world motorsport, which is the “Federation Internationale de l’Automobile” (FIA) based in Geneva and Paris. The FIA recognizes in each of its affiliated countries, one sole authority that holds the sporting power and in Ireland it recognizes MI as that authority.

Motorsport Ireland’s jurisdiction covers the 26 counties and has under its umbrella 34 affiliated motor clubs that are the actual organisers of all sporting events. In each year there are approximately 230 events listed in the official calendar and these cover 11 different branches of the sport. Every person wishing to compete in one of these motorsport events must be the holder of a Competition Licence issued by MI or by another national governing body affiliated to the FIA. On average, each year MI issues over 4,000 Competition Licences to Motorsport.