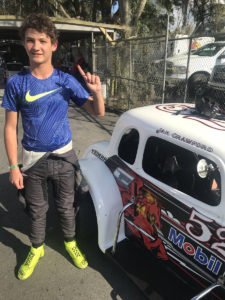 Jak Crawford’s ability to learn new racing categories quickly has allowed him to expand his resume as a two-sport racer. The young Texan was a quick study in Junior level karting starting in the winter of 2017 and produced immediately impressive results, and the same can now be said in his foray in the INEX Legend’s Car Young Lions category that began mid-year 2017.

The results in Legend’s car racing have been striking for Crawford. Claiming his first signature win at the prestigious Bojangles Summer Shootout event at Charlotte Motor Speedway just a few weeks after starting in the fast and feisty, hard-to-handle Legends machine, Jak learned to be comfortable being uncomfortable. Having only competed in karting up until this transfer point, Crawford quickly developed the skills and knowledge of the Legend cars and became an instant frontrunner in the sport.

“I love karting but I also have a new appreciation and love for the Legend car racing world,” explained the Houston Texas resident, who is set to embark on a European karting program over the next seven months. “Some of the drivers I have raced against have been racing these types of race cars since they started, and it made me really step up to try to learn as fast as I could. I always want to win so I had to learn these cars quickly to make sure I was successful.”

Other honors came including more wins, then a big step up to a third-place podium finish at Oval Nationals and a World Championship in the road course category, both late in 2017. Jak would also garner a Vice-Championship in the 2017/2018 Winter Heat Series at Charlotte Motor Speedway where he scored a win and eight consecutive podium results.

Perhaps Jak’s biggest achievement in Legend’s car racing to-date was reserved for his overwhelming results at Winter Nationals in February 2018 where he scored four wins out of five races and the championship as well. Never qualifying on pole, but always close to the front, Jak was able to capitalize in all five races on his superior race craft skills that promote both patience and precision passing.

After two tough wins in the first two races at Winter Nationals, Jak’s luck would change in the series that did not allow any race drops for the championship points battle. In the third event, an engine failed and blew up in an impressive fire with two laps to go. Jak was not leading at the time but sitting in the cat bird’s seat for the win, and after the smoke settled he would be relegated to a 24th place finish. Race four was a tough one lacking overall speed, yet Jak still chalked up the win. Then when the heat was on in the final event, being down in championship points due to the blown motor, the youngster showed his prowess, and closed out the fifth race with a resounding victory and the championship.

Jak’s quick-study ability and success in both karting and Legend’s cars has allowed him to dream about his increasing opportunity to be a two-sport racer in the same way another Houstonian has in AJ Foyt. Accomplishing success in motorsports is tough in any way, but Crawford, a preteen from Texas, hopes to follow in the footsteps of some others on his way to the highest level of racing in the world.

Jak would like to thank OMP racing gear and Bell Helmets USA for their protective race gear. A big thanks to Legends Car marketing partner Mobil 1. More thanks to Chase Pistone, Inc. and their entire crew who worked tirelessly to change out the blown motor and just barely make it out on track in time for the next feature race.